Academy Playoffs: Wrapping up at Westfield 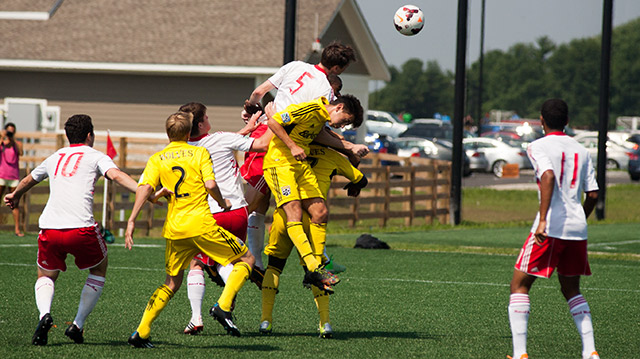 WESTFIELD, Indiana — The Development Academy tournament concluded Friday with some of the U16 teams punching their ticket to the quarterfinals. The final day brought more defensive strongholds and exciting anticipation for Finals Week.

Here's a glimpse of the last day's most fascinating games.

Friday’s matchup between the LA Galaxy and D.C. United was intensified as the two teams went into the game tied with six points each, leading Group D. The winner would not only win the group but also move on to the quarterfinals.

Both teams had a bit of a sluggish start, as there wasn’t much offense in the game until Daniel Reeves of D.C. United fired a shot inside the box that ended up being blocked by Galaxy goalkeeper Bennett Sneddon.

Moments later D.C. United was on the attack, but couldn’t break quickly enough after Rey Ortiz’s corner kick in the 33rd minute. Following the broken corner, LA went on a spurt of their own to end the half.

Lucas Mendes had a good look at a goal for the Galaxy, but his shot barely soared over the top crossbar. LA had a final attempt before the first half ended coming from Antonio Bustamante’s cross to Donovan Pines who headed it just shy of the goal, resulting in a 0-0 halftime score.

LA struck just ten minutes into the second half claiming a 1-0 lead and the game’s momentum. Strong defense and good passing allowed the Galaxy to control most of the remaining time, however D.C. United was knocking on the door in the last few minutes.

Neither Jean-Cristophe Koffi nor Gerson Umana’s shots were able to produce the game-tying goal in the final minutes, allowing the Galaxy to win the group and advance to the quarterfinals after a 1-0 victory.

St. Louis Scott Gallagher Missouri ended their week off and a good note, as did Real Salt Lake. Real Salt Lake had already won Group F heading into Friday’s game after a 3-1 win against NJSA Tuesday and a 5-2 win against Georgia United Wednesday.

The match got rolling in the 17th minute when Real’s Diego Silva had a good look at a goal in transition, but St. Louis’s goalkeeper knocked it away. Real Salt Lake controlled the possession in the first half through good ball movement and smart passing.

Two missed shots by Sebastian Saucedo looked to end the first half for Real Salt Lake, but they were shocked when Alex Ciaramitaro had something else in mind.

Alex Ciaramitaro had hands down the best goal of the week, scoring from about 35 yards out on a free kick from the sidelines that was placed perfectly in the upper 90. Ciaramitaro’s goal gave St. Louis a 1-0 lead at the half.

Early in the second half St. Louis’s Sean Gouveia looked to push their lead to 2-0, but the shot landed far left of the goal. However St. Louis eventually did make it a 2-0 lead after a goal from Brendan McDonough.

Real Salt Lake suffered its first defeat of group play, but had no sign of grief as they know they will be advancing to the U16 Finals Week.