Year after year, Concorde Fire and South Carolina United Battery Academy are two of the most consistent clubs in the Development Academy. This season, the two clubs are battling it out in the Southeast Division with the Fire holding the top spot in the U18 age group, and Battery sitting in fourth (six points off pace).

Sunday’s fixture between the two sides could close that gap at the top, but Battery will need a more complete effort than last week when they dropped a 4-1 result to Chargers SC in their first game back from break.

Battery won the first meeting between these teams in November 3-2 thanks to a hat trick from South Carolina-bound striker James Carlin. Since then, Concorde Fire has won five in a row. Stopping Carlin will be the key to keeping that streak alive. 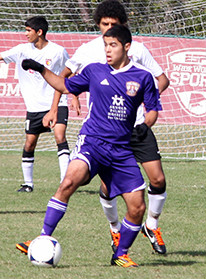 The showdown at the University of South Carolina is the only game on the schedule for Sunday, but there are plenty of games on the docket for Saturday. Below is a rundown of the action.

All nine teams from the Southwest Division are in play on Saturday with most of the games taking place in Southern California. The two exceptions are Real Salt Lake-Arizona hosting Strikers FC in the desert, and LA Galaxy traveling to North California for a game against San Juan Soccer Club.

RSL-AZ is looking to hold down the top spot in the division in both age groups as the season inches past the midway point and heads toward the twilight. RSL-AZ’s return from the break went well two weekends ago with crushing victories over Nomads SC in both age groups. However, Strikers are no pushovers and the U18 team is riding a seven-game unbeaten run.

In Southern California, Pateadores takes on Chivas USA, Real So Cal hosts Nomads, and Arsenal faces San Diego Surf in division play on Saturday. Real So Cal U18 could jump into the top spot in the division with a win and losses by Galaxy and RSL-AZ.

There is only a pair of games on the schedule for Saturday in Texas with FC Dallas taking on Classics Elite and Dallas Texans facing off against Houston Dynamo.

The latter fixture is a matchup of the top two teams in the Frontier Division. Dallas Texans are 9-2-3 on the season thanks to a solid defense and a speedy attack led by forward Christian Soldat who has five goals this year. In net, Harrison Hunter has only let in 15 goals in 14 games. Houston Dynamo’s attack will definitely challenge that though. The MLS Academy has the best offense, statistically, in the division. Forward Bryan Salazar is the leading scorer with nine goals to his name.

There is a trio of contests lined up for Saturday in the Southeast Division. Orlando City takes on North Meck SC, IMG Academy squares off against Kendall SC, and CASL battles Charlotte Soccer Academy.

Orlando City U16 is growing its lead in the division with each game, as the team has enjoyed unparallel success in its debut campaign. Richard Prestridge’s 14 goals in 12 games have gained much of the attention, but across the board OCYS has been a dominant force in the Academy this season.

CASL is the squad chasing Orlando City in the standings. The North Carolina club is seven points off the pace at this point, and could use some help this weekend with a win over Charlotte. CASL’s William Gauger leads the squad in scoring with eight goals to his name.