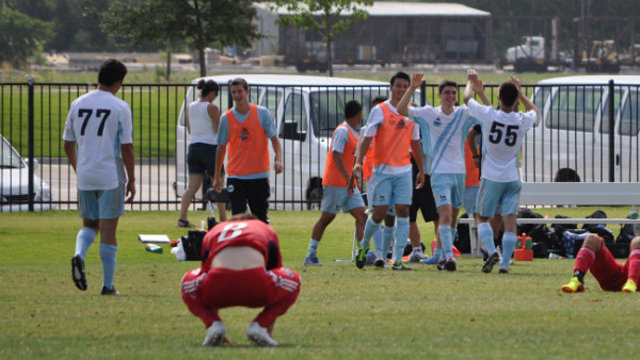 The Development Academy has a gathering reputation as a competitive year-round league from top to bottom. While frontrunners abound,  the general perception is that the league's middle-tier teams are tightening their grip on some of the runaway favorites.

So it went at the U16 Development Academy Playoffs in Frisco. The New York Red Bulls, the easy favorite not only to win their group in Frisco but to win the entire thing, were rolled out of the competition in a 3-1 victory by the Houston Dynamo on the tournament's final day. The Dynamo didn't just steal NYRB's thunder. They stole their spot at finals.

It was a mighty salvo fired across the bow of the other seven U16 teams to qualify for the coming Finals Week in Houston.

Finals Week, the Academy's Showcase event for eight group winners from Frisco's playoffs, kicks off with games Sunday and runs through Friday. Three days of group games finish up Thursday at Houston Amateur Sports Park, and the title game is Friday at the Houston Dynamo's BBVA Compass Stadium.

"It's a special time," RSL assistant coach Freddy Juarez said. "The boys worked for it. All the teams that got there are well-deserved. There's a few other ones that should've got there that were unlucky at times, but there's a lot of good teams in the Academy. It's a privilege to be there."

While the Christian Lucatero, Elochukwu Ozumba-led Dynamo upset of NYRB set tremors through the U16 landscape, it wasn't the only thriller on tap in Frisco. FC Dallas and Real Salt Lake faced off on the final day of group games just yards from the Dynamo game, and the winner was assured a spot in Houston. The two teams staged an epic contest, with RSL coming out 6-3 winners to steal the spot to Finals Week. Behind the vibrant play of Brooks Lennon and Sebastian Saucedo, RSL took a 4-1 lead only to watch FCD whittle it down to 4-3 late in the second half.

RSL responded with a withering offensive blast, scoring two more in quick succession to assure passage to nationals. As a residency program stationed in Casa Grande, Ariz., RSL has to deal with a unique set of travel challenges to get to Houston. Still, they have to be considered one of the frontrunners.

"I think it's almost like a reward," Juarez said. "Not so much for us, but I think we try to do things the right way. We try build out of the way, we try to play possession, we try to develop players for our first team, but also national team players who are technical, intelligent players. We really stress that for our guys. Try not to change your game for the competition. So when you're trying to do the right things, in a way it's like being rewarded."

In Houston, juicy matchups abound. In Group 3, Solar Chelsea and Crew Wolves were both a perfect 3-0-0 in group play in Frisco, posting nearly identical goals for and against numbers in the process. The Rapids are making their first ever trip to the U16 finals, and their stout back line, led by right back Enda O'Neill, will face a similarly rugged defense in De Anza Force. Both teams had identical 2-0-1 records in Frisco and both had five goals and two goals against.

"We get tremendous leadership from our center backs, and we're blessed with a number of good central midfield players that kind of help us on a good day to be strong offensively and defensively," Wolves coach Lars Richters said.

In the other group, perhaps the most tantalizing matchup is between two local clubs in the Dynamo and Texans. Neither lost a game in Frisco last month, and despite the fact that the Dynamo were the talk of the town, the Texans quietly took care of business. Tulsa midfield commit Zach Jackson led the Texans to four goals in Frisco, while they didn't give up a single goal in three games. That game should bring local fans out of the woodwork.

Albertson SC, one of just two programs along with the Force to get both its U16 and U18 teams to Houston, went 2-1-0 at the playoffs and beat out PDA for the spot on a tiebreaker after both had six points.