Development Academy clubs have a way of luring the best of the best to the elite boys club soccer league in the United States. 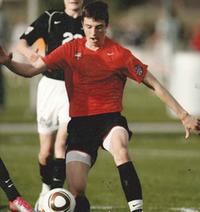 From time to time, there are players that join the league and make an immediate impact. Over the past week, a couple of those players continued their hot starts to their Academy careers while leading their teams to successful weekends.

Former Cameroon U17 Men’s National Team player Lesley Nchanji notched his fourth goal of the season on Saturday in a 3-1 win for Shattuck-Saint Mary’s U18 over St. Louis Scott Gallagher Metro. Nchanji has played nine games in the Academy now. Geoffrey Dee and Ricardo Lopez-Espin also scored for SSM in the win.

In Michigan, Chicago Magic PSG U16 forward Andrija Novakovich continued his stellar run of play with four goals over the weekend. Novakovich, a Marquette commit, scored the lone goal in a 2-1 loss to Crew Soccer Academy Wolves on Saturday. He followed that up with three goals on Sunday in a 4-1 win over Vardar SC Freiburg. The forward from Milwaukee has only played in six games for Magic, but he already leads the team in scoring with five goals.

In the lone fixture from the West Conference, San Diego Surf held onto the upper hand over Nomads SC on Sunday. The two U18 teams battled to a 0-0 draw, but Surf won the U16 matchup 2-0, as the squad keeps some hope of a playoff berth alive.

Alec Neumann and Leandro Lemache scored for Players Development Academy U18, the top team in the Atlantic Division, in a 2-0 win over Match Fit Academy on Saturday. Neumann leads the team with 10 goals on the season. The U16 game ended 4-0 in favor of PDA with Conlan Kemmerer scoring twice. Brian White and Noah Synder also scored in the win.

Richmond Strikers U16 held D.C. United to a 1-1 draw on Saturday. Fourteen-year-old Milton Juarez scored the opening goal for D.C. United after six minutes. Jonathan Cullom answered four minutes later for Strikers. The dropped points for the MLS Academy closed the gap only slightly at the top of the Atlantic Division.

Revolution Empire U18 picked up an important six points over the weekend with wins against South Central Premier and Oakwood Soccer Club. Both games ended with the same 2-0 score. Ethan Kutler was on the hero on Saturday with both goals, while Ben Swanger and Matthew Vuylsteke scored in Sunday’s victory.

Oakwood SC’s U16 squad did pick up a win over the weekend with a 2-1 victory against Montreal Impact FC on Satruday. James Thompkins scored both goals for the home side, which remains in second place in the Northeast Division.

Baltimore Bays Chelsea pushed its undefeated streak as a club to six games with wins in both age groups over the Richmond Kickers on Saturday. In the U16 game, BBC cruised to a 5-0 win with two goals from Abdallah Bangura and a goal a piece from Kelvin Davis, Morgan Lussi, and Connor Smith. BBC also enjoyed a comfortable win in the U18 age group with Romilio Hernandez, Angus Maloney, Babatunji Osifeso, and Alexander Ponvert all contributing to a 5-1 win.

Crew Soccer Academy Wolves U16 finished the weekend with a win and a draw. Michigan State commit Ken Krolicki and Kalenga Selemani scored for Wolves in a 2-1 win over Chicago Magic PSG on Saturday. The Michigan club battled to a 1-1 draw with Chicago Fire on Sunday. Wolves look to be in firm control of Mid-America Division with 10 games left on the schedule.

Crew Soccer Academy U18 pushed its record back to even (8-8-1) with a win over Sockers FC on Saturday. William Bayemi and Andrew Mckelvey scored for the MLS Academy in a 2-0 result.