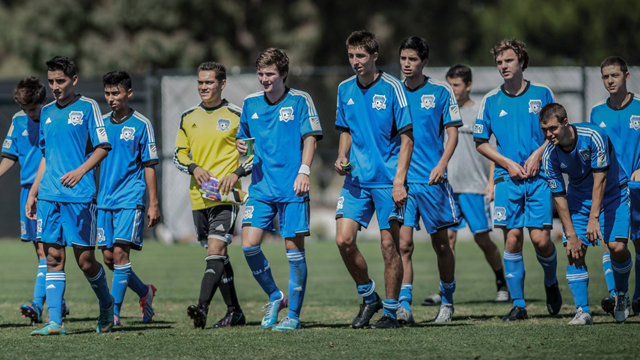 There was some movement in the top spots in the Development Academy standings over the weekend as teams from every conference tried to jump up the table heading into the final weekends of March. 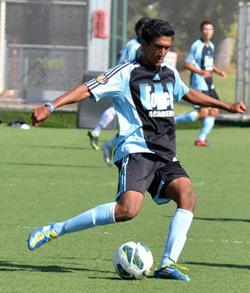 LA Galaxy U18 kept the hunt alive for the top spot in the Southwest Division with a win over San Diego Surf on Saturday in a wild encounter. Galaxy tallied two goals in the final ten minutes to nab a 4-3 victory and move within one point of RSL at the top of the standings. With leading scorer Adonis Amaya sidelined, Galaxy used goals from Christian Chavez, Malcolm Jones, Steve Martinez, and Jaime Villarreal to capture the road win. John Aguilar and Zachary Lagotta scored for Surf. Galaxy rolled to a 3-1 win in the U16 game thanks to a pair of goals from Servite High School’s Dylan Smith. Adrian Vera notched the other strike. Jose Palacio scored the lone goal for Surf. Galaxy completed the sweep with a 2-0 win in the U14 age group. U.S. U15 Boys National Team forward Hanif Wright scored his 13th goal of the season for Galaxy. Leonardo Zulli captured the goal.

San Jose’s U16 squad took the mentality of its first team over the weekend and stormed back from a 0-3 deficit against Real Salt Lake AZ, one of the favorites to win the national championship this summer, and captured a 4-3 win. It was the first loss since Oct. 6 for RSL. RSL U18 won the opening matchup of the day 2-1 thanks to second-half strikes from Stanford-bound forward Corey Baird and Luis Lopez. Juan Velasquez scored for the Quakes.

In the damp Northwest, Seattle Sounders notched wins over city rivals Crossfire Premier in both the U18 and U16 age group. Cody Crook’s 90th minute goal was the difference in the U18 game where Sounders captured a 3-2 win. David Olsen and Victor Rojas also scored for the Sounders. Tolossa Hassan and Luke Olney scored for Crossfire. The U16 contest was equally as close as an early goal in the second half separated the teams in a 1-0 decision. Victory Mansaray scored the lone goal for the Sounders. Sounders U16 remains in the top spot in the Northwest Division, but the U18 squad sits in second due to another victory by De Anza Force on Saturday.

Colorado Rush U18 pushed into second place over the weekend thanks to a six-point showing. Rush defeated Andromeda 2-1 on Saturday behind goals from Spencer Goldstein and Joseph Kerridge. Rush also won 2-1 on Sunday against the Dallas Texans. The Rush U16 squad is also in the hunt for a top-three spot after a four-point weekend. Devin Guidichessi scored the lone goal on Saturday in a 1-0 win over Andromeda. He followed that up with another goal on Sunday in a 2-2 draw against Dallas Texans.

Indiana Fire Academy snagged a point on the road in a 1-1 result against Crew Soccer Academy on Saturday. Omar Mohamed scored for Crew while Connor Corrigan struck gold for the Fire-affiliate.

D.C. United ruled the day on Sunday with a pair of wins against Match Fit Academy FC. Jorge Calix and Julian Cummings scored in the U18 game to give United a 2-0 win. Lucas Mendes, Owen Marshall, Antonio Bustamante, and Christophe Koffi scored for D.C. United’s U16 in a 4-0 victory.

New York Red Bulls also rolled to three wins over BCS CT Academy over the weekend with victories in every age group. The U18 team started the day on the right foot with a 4-2 win. Wesley Wade opened the scoring the first half and then second half tallies from Dante Perez, Brian Ortiz, and an own goal gave New York the win. Kyle Zajec scored a hat trick for New York Red Bulls U16 in a 4-0 win. Mevlan Lebiti scored the other goal. Red Bulls U14 rolled to a 9-0 win in the final game. Timothy Weah, the son of legend George Weah, had two goals in the victory. Weah is scheduled to join the U.S. U14 BNT in California next week for a seven-day camp at the National Training Center.

In the big game of the weekend in the East Conference, Carolina Rapids showed their quality with a 4-1 win over Capital Area RailHawks Academy – CASL in the U18 age group. Tanner Roberts had two goals for Rapids while Bayley Cashion and Jack Zollicoffer each added a goal in the win. Rapids took over the top spot in the Southeast Division with the win.