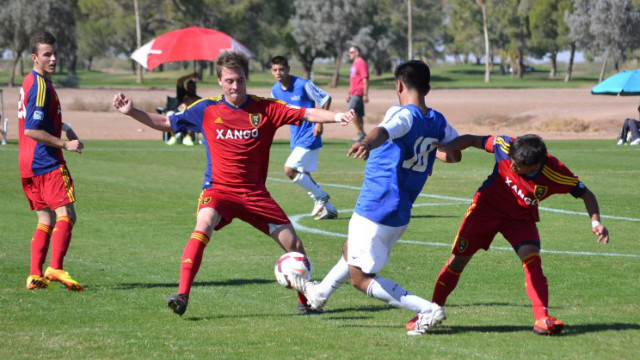 Corey Baird, Jose Hernandez, Niki Jackson and Eric Carbajal all tallied as Real Salt Lake-AZ’s U18s took care of Arsenal FC 4-1. Brooks Lennon had two assists as well for the Case Grande outfit. The U16s also rolled to a 6-0 win, getting goals from Miles Stray, Justen Glad and Sebastian Saucedo. In 5 matches the U-16 team has outscored their opponents 22-3.

After conceding twice in the first half, LA Galaxy U18s rallied to secure a point, drawing 2-2 with Real So Cal. Christian Perez and Martin Arrieta both scored to open up a 2-0 lead for Real So Cal, but Adonis Amaya and Jaime Villarreal provided tallies after the break to level things. The Galaxy U16s had an easy time of it, winning 5-0 in the other match on Sunday.

In an Academy Cascadia clash, the Vancouver Whitecaps U18s held off a valiant effort against Portland, eclipsing their neighbors to the south, 3-2. Jordan Haynes scored in the 75th minute, proving to be the winner even after Samuel Werner made it a one-goal game for Portland with seven minutes left. Dario Zanatta scored twice for Vancouver’s U16s, making it a clean sweep on the day with a 2-0 victory.

Capital Area Railhawks U18s maintained their unbeaten start to the season, posting a 1-0-1 mark against visiting Florida clubs. Daniel Davis scored the winner in a 1-0 win over IMG Academy, while the Railhawks drew 0-0 with Chargers SC. The U16s could only muster a split over the weekend, topping IMG 5-0, but dropping Sunday’s game 4-2 against Chargers.

Needing a win to keep up with PDA, Bethesda Olney’s U18s came out on top in a shootout against the Richmond Strikers, winning 4-3 on the day. It was a bit more comfortable for the Bethesda Olney U16s, which won 3-0.

A late winner by Anthony Mandola in the 85th minute secured the win for NJSA 04 U18s, which held off Continental FC Delco. Matias Fracchia also scored prior to departing for U20 MNT duty, along with Christopher Noel for the New Jersey side. Tolunimi Ibikunle and Kenneth McArthur scored for Delco.

A hat trick by Thomas Parides proved to be enough for Andromeda FC U18s, which picked up the full points with a 4-3 victory against the Colorado Rush. The Andromeda U16s also topped the Rush by a 1-0 score.

Shattuck St. Mary’s U18s overturned a one-goal deficit, coming from behind to win 2-1 against Internationals. All the scoring took place in a five-minute span in the second half. Jacob Duska scored in the 60th minute for Internationals, only for Lesley Nchanji to answer a minute later, and Abdulla Al-Kalisy putting Shattuck ahead for good in the 65th minute. The two U16 sides battled to an epic 4-4 draw as well.

Two goals apiece from Ahinga Selemani and Ken Krolicki paved the way for Crew Soccer Academy Wolves U18s 4-1 win over the Chicago Magic. Paid a visit by both the Chicago Fire as well, Wolves fell 2-1. CSA Wolves U16s also split the matches against the Chicagoland pair, losing 2-1 against the Magic but besting the Fire 1-0.

Making the trip to Frisco, Texas, Sporting KC U18s notched an impressive 3-1 victory against FC Dallas. Sporting opened the scoring in the 40th minute thanks to Cole Stevenson, piling it on late with goals in the 87th and 90th minutes by Zach Wright and Nic Jaimes. Aaron Meyer bagged FCD’s lone goal of the game. It wasn’t the same result in the U16 meeting, as a hat trick from Emanuel Perez keyed FCD to a 4-1 win.