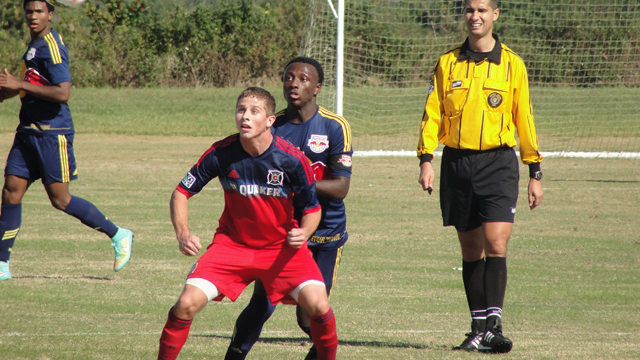 LAKEWOOD RANCH, FLORIDA — The Development Academy Showcase kicked off on Saturday with the U17/18 age group. The U15/16 will join the fun on Sunday with their first taste of the action.

The opening day featured a number of games between teams in the playoff hunt at this stage of the season. The quality of the play lived up to the perception from most of the anticipated fixtures.

New York Red Bulls jumped out to an early lead when right back Kyle Duncan headed home Derrick Etienne’s free kick service. Duncan rose above the defense on the far post and nodded in the opening tally.

Indiana Fire goalkeeper Ryan Clark kept the Central Conference side in the contest with a spell of quality saves. Clark made a diving save on a shot from Etienne in the 13th minute and then made another highlight-reel save eight minutes later to keep NY to only one goal through the first 25 minutes.

Indiana Fire found the equalizer in the 27th minute when Nicholas Anderson slotted home a deflected free kick. Connor Corrigan struck the free kick that hit off the shin of two New York Red Bull defenders before falling directly into the path of Anderson who put the simple finish into the back of the net.

New York regained the lead eight minutes later when a similar situation played out on the other end. Etienne ended up with the ball at the top of the box after a scramble between multiple players when Indiana failed to clear a loose ball 20 yards from goal. Etienne placed his shot low and into the corner to give NY the lead.

Indiana nearly answered back five minutes later when Zachary Tom and Corrigan linked up on a goal, but the assistant referee lifted his flag for offside to keep Indiana to only one goal in the first half.

New York continued to generate chances early in the second half. Clark made another tremendous string of saves in the 47 and 48 minutes. The 6’3 goalkeeper could only hold for so long though.

Substitute Juan Sebastian Sanchez shredded the Indiana defense on the dribble and then slipped Ehtan Lochner in on the left channel. Lochner cut in on his right foot and took a few touches before curling a shot into the upper corner of the net.

Sanchez tallied the last goal of the game in the 81st minute. The play started with Christopher Flores. The winger hit a well-weighted pass into the path of left back Marcello Borges. With multiple runners in the box, Borges had plenty of options. He picked out Sanchez about 12 yards from goal. Sanchez smashed it into the bottom corner for New York’s fourth goal of the game.

Real So Cal struck first in the seventh minute when Sam Strong put away a long throw-in from Bilal Abdallah.

Following the goal, the two teams settled in with chances at both ends. Justin Vom Steeg came up a couple of saves to keep Kendall off the board. However, Kendall did find its breakthrough in the dying moments of the first half.

Real So Cal was disposed in its own half and Kendall quickly went on the attack. Gabriel Osorio broke free of the defense and then lifted his shot over Vom Steeg, who came out to challenge on the breakaway, for the equalizer.

Osorio netted the game-winner in the 58th minute. The Real So Cal defense broken down in the center of the field and Osorio chested down a pass before he struck a volley at goal. Vom Steeg made the save, but the rebound was left on the doorstep. Osorio beat everyone to the loose ball and punched in his second of the day.

Kendall added an insurance goal with 15 minutes left when Juan Gamino was played in behind the Real So Cal defense. Gamino put it away for the third goal of the day for Kendall.

Carolina Rapids battled back from a deficit and nabbed a goal in the second half to take a point from the showdown against the Northern California side.

Phillip Goodrum scored the equalizer for the Rapids on a nice volley after a quick passing sequence through the center of the field.

Rapids goalkeeper Elliot Panicco came up big with a save midway through the second half on a shot from Matthew Powell from the top of the box. The diving effort from Panicco helped the Rapids earn the result on Saturday.