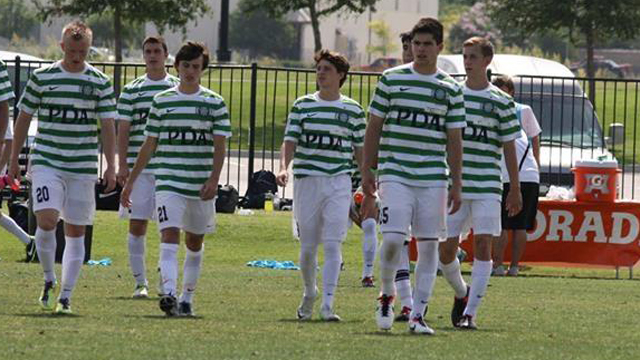 Another weekend of busy Development Academy action featured a number of matchups between local rivals. See which clubs emerged victorious.

A strong start to life in the DA continued for Philadelphia Union U16, which won its fifth straight game to start the season with a 4-0 win over Baltimore Bays. Kevin Carvalho scored twice, while Colin Brezniak and Isaiah Young also found the back of the net. Despite scoring in the third minute, the Union’s U18s couldn’t come away with the three points, as the Bays tallied twice to emerge 2-1 winners. The Union won the U14 matchup and cruised to a 3-0 win, continuing the positive start to the season.

With top talents like Chase Gasper and Jeremy Ebobisse Ebolo off at U18 MNT camp, Bethesda Olney U18 was unable to get the better of PDA, losing 2-1 to the New Jersey side. Brian White accounted for both goals for PDA, which remains a perfect 5-0-0 on the young season. The NJ hosts also won the U16 meeting, as Cameron Harr’s four goals led the way in a 6-4 shootout.

A meeting of MLS rivals at the Academy level between New York Red Bulls and the New England Revolution featured plenty of goals. The Red Bulls cruised in the U18 match, getting goals from Arun Basuljevic, Derrick Etienne, Amando Moreno and Alexander Tejera to win 5-1. It was a clean sweep for the Red Bulls on the day, as the U16s won 3-0, and the U14s were victorious by a 3-1 score line.

Nicholas Petridis and Altin Celaj each scored two goals a piece in BSC CT Academy’s 5-1 win over Revolution Empire in the U16 game.

Two goals from Khallil Stewart’s helped Concorde Fire pick up the full points against local counterparts Georgia United, a 2-0 win in the meeting of U18 squads. The two U16 teams drew 1-1, as Jahmeil Curwen scored the equalizer for Concorde in the 76th minute.

There was little to separate the Chicago Magic from the Chicago Fire U18s, as the two sides drew 2-2 thanks to Connor McNulty’s 57th minute equalizing strike for the Magic. The Magic won the U16 battle 2-1, while the Fire’s U14s ran away 6-1 winners.

Six goals, all in the second half, powered Indiana Fire Academy U18 to a 6-1 defeat of Internationals. Cameron Lindley opened the scoring in the 54th minute, and from there the cascade of goals began.

It’s always an intriguing matchup when Seattle Sounders line up against Crossfire. And this past weekend was no different, as the two U18 sides drew 3-3. Wesley Stark provided the equalizer in the 71st minute for Crossfire, negating Henry Wingo’s two-goal effort that including a 66th minute goal to put the Sounders out in front. The U16 sides traded second half goals in a 1-1 draw.

Four goals from Adonis Amaya powered the LA Galaxy U18 to a 5-1 win over San Diego Surf on Sunday. Providing the consolation tally for the Surf was Bryce Flores, while the Galaxy extended its record to a perfect 5-0-0. The U16 sides drew 1-1.