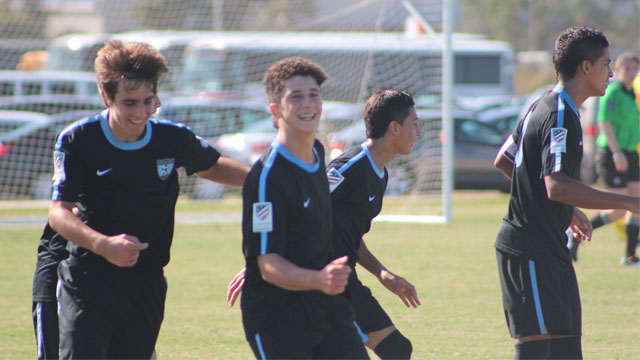 LAKEWOOD RANCH, Florida – The 2012 Winter Showcase continued Monday, as the U16 teams took the day off, and the Under 18 teams played their third and final match of the week.

Here’s a quick sample of some of the best action of the day:

A hat trick from Leandro Lemache led Players Development Academy to a 4-2 win over the Colorado Rapids, completing an unbeaten run at the Showcase for the New Jersey club.

“Overall I thought the game was good, from start to finish, for our guys,” PDA head coach Brian Grazier said afterwards. “They were a tough, strong physical group, but after awhile, first 15, 20 minutes we got into our groove and did some good things in the final third.”

PDA controlled the match for long stretches, attacking with forwards Alec Neumann, Max Kroschwitz and Lemache operating in the midfield. It didn’t take long for Lemache to open the scoring, latching onto a bouncing ball into the box and calmly slotting his shot home.

Forward Eric Kronenberg answered for the Rapids not too long after, chipping PDA ‘keeper Eric Gutierrez to tie the game at 1-1. The two teams would trade goals on either side of the half, as Lemache scored again, cleaning up a scramble in the box to restore PDA’s lead, before Colorado found the back of the net again on a free kick to tie it at 2-2.

But PDA took over for the rest of the second half, despite Rapids midfielder Ricardo Perez doing his best to try and keep his side in the game. It came to no avail, as Jonathan Azzinnari headed home a failed clearance, and Lemache punished another mistake to round out the scoring and secure his hat trick.

The result came as little surprise – PDA currently sits in first place in the Atlantic Division out in the Eastern Conference prior to the Showcase, wrapping up the event with a 2-0-1 record in Florida.

It looked like it was going to be one of those days for Pateadores.

The California club, matched up against a tough and determined BW Gottsche side, found themselves trailing 2-1 late in the second half during the second wave of Monday’s games.

Pats found themselves in the situation despite creating a number of chances and looking like the better side for long stretches of the game – controlling the ball well and out-possessing BW. But they were trailing thanks to a pair of goals from striker Alhoussain Bah on the counter attack, his pace undoing the Pats’ defense.

Forward Kevin de la Torre was immense as Pateadores searched for the equalizer, the UCLA recruit controlling the ball well in tight spaces, making smart passes and wreaking havoc along BW’s back line.

In the end, for all the build up and passing movement that create chances for Pats, it was a direct ball that produced the equalizer; BW goalkeeper Mark Rajovic misplayed a long ball over the defensive line that de la Torre at first tried to head, but he missed the initial attempt, only for the ball to fall at his feet, leaving him a simple tap-in to snatch a 2-2 draw.

The highly rated club from Maryland had enough firepower to best the Thunder, grabbing a 4-2 win, the third straight for the Bays at the Winter Showcase.

Forward Yaw Amankwa was a constant threat up top for the Bays, finding the back of the net twice in the game's first ten minutes to get the game started off right. Michael DeGraffenreidt stood out along Baltimore’s back line, providing an athletic presence to snuff out the Thunder’s threats.

Midfield maestro Romillio Hernandez didn’t put in a dominant performance that he is capable of, but he provided the final tally of the game from the penalty spot, putting the game out of reach in the final 10 minutes.

Alex Muyl helped the New York Red Bulls come from behind and defeat the LA Galaxy 2-1, in a battle that featured two undefeated teams entering the game.

With the amount of talent on the field, the game was played at a high level – the Galaxy relying on Justin Dhillon, William Raygoza and Paul Arriola, while Red Bulls started top prospects such as Arun Basuljevic, Alex Muyl, Ethan Decker, Adam Najem and Matthew Miazga.

It was the Galaxy that took the lead first as Arriola found himself unmarked at the back post to tap in and give the LA side an early lead. But Muyl would lead the fight back a goal on either side of the half, the Georgetown-bound striker providing the winning goals for his side – despite his teammates Decker missing a first half penalty.

U17 MNT forwards Adonis Amaya and Bradford Jamison IV led Chivas USA to a close 4-3 win against MLS Academy side D.C. United. Amaya and Jamison both are part of the U17 Residency program, but didn’t make the roster for the national team and spent the last few games with their club team, Chivas.

See all the scores from day four of the Showcase