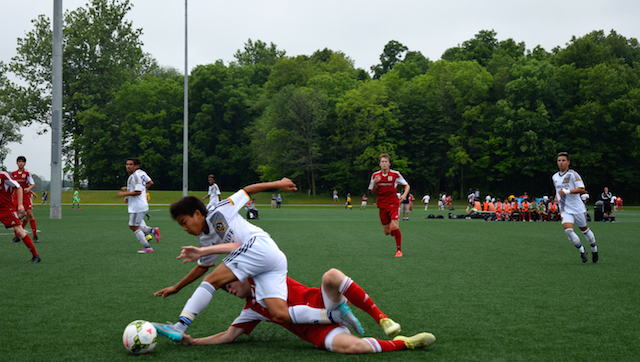 WESTFIELD, Indiana - The second day of the U.S. Soccer Development Academy U14 National Showcase is in the books. The took to the turf fields at Grand Park Sports Campus again on Saturday as Friday’s storm left the grass too damp for action. The turf did not take away from the action though.

Some teams tried to bounce back on the second day of play while others looked to improve on a good start to the Showcase. Below is a recap of some of the games that TopDrawerSoccer saw on Saturday.

The morning fixture between the two teams that won their openers provided an unequal level of excitement that the rest of the day just could not meet. Galaxy and Georgia United combined for one of the best games of the Showcase so far and it will be difficult for any game to come close to duplicating the quality or entertainment value.

Galaxy controlled the early part of the game while knocking the ball around the center of the field, but never finding that cutting pass to penetrate the United defense. United stayed compact and waited for the right moments to spring on Galaxy.

GA United took advantage of the first chance in the fourth minute when Zyen Jones burst past his defender, got to the end line, and played in a cross for Carlos Reyes to tap into the net.

Galaxy stuck to the game plan and tried to knock the ball around while looking for a crack in the armor of the United defense. It took a moment of individual skill from Kevin Negrete to expose that break in the United backline.

Negrete received the ball toward the left sideline and cut back toward goal. With a couple of feet of space, he hit a driven cross at the top of the box, which struck the arm of a United defender who was sliding to clear it away. The referee awarded a penalty kick, which Negrete converted.

Galaxy nearly had the go-ahead goal minutes later when Zico Bailey crossed it to Jonathan Estrada, but a great save from Berk Watson kept it out of the goal.

Galaxy kept knocking on the door for the go-ahead goal after finding the equalizer. Defender Jake Arteaga headed home a cross from midfielder Jacob Muchnick after a corner kick went long, but the referee wiped the goal away ruling that Arteaga was offside.

Tristan Weber had a breakaway in the 29th minute, but he was also called offside.

In the 36th minute, GA United regained the lead and it was Jones again. This time Jones did it all by himself. He received the ball on the left side and cut toward the middle with his first touch. He beat his defender with a bit of skill and then pushed the ball into open space. None of the Galaxy defenders stepped up to stop him, so he ripped a screamer from 25 yards out that scorched the bottom right side of the net. It was clearly the goal of the game.

GA United took the 2-1 lead into half

Galaxy made some adjustments early in the second half, which included bringing on Kyle Holcomb. Holcomb’s first chance came in the 50th minute when Weber broke free of his mark and hit a cross to the far post. Holcomb was in the perfect spot but his touch put the ball wide of the post.

Two minutes later, Holcomb had another look on a breakaway, but his shot hit the post and went out of bounds.

GA United tried to sneak another goal past Galaxy with Langston Blackstock slipping in Ian Farquhar behind the defense. Galaxy goalkeeper Roger Penske made a great save on Farquhar’s shot from 12 yards out to keep the game at 2-1.

With 10 minutes left in the game, the game went from great to insane. Holcomb struck the equalizer after a quick passing sequence at the top of the box.

With three minutes left, Holcomb picked off a pass across the GA United defense and played it to Negrete who ripped it into the bottom corner to put Galaxy up 3-2.

One minute later, Christian Gomez tried a shot from the corner of the box that Watson turned away, but Holcomb was in the perfect spot to tap it home for a 4-2 Galaxy lead.

With only seconds left, Jones got his second goal of the game when he pushed a bouncing ball past the Galaxy defense with his head and then placed his left-footed shot past the goalkeepers outstretched arm and into the corner of the net, which brought GA United back to just down one goal.

However, GA United did not get another chance at it and Galaxy’s feverish comeback resulted in a 4-3 win for the MLS Academy. Galaxy (2-0) finishes up the Showcase with a game against Vardar (1-0-1) on Monday. GA United (1-1) meets Sockers FC (0-1) on Monday.

Jason Garcia scored a late goal for Arsenal, which made the score look a little closer than it was on Saturday. Bethesda-Olney bossed the vast majority of the game and Arsenal did not seem entirely interested in trying to match wits with the North Atlantic Division side.

The game did start with a lot of promise for Arsenal. Alberto Vasquez picked out the run of Sebastian Sandoval behind the BOSA defense, but goalkeeper Erich Kindermann turned the shot away with his right hand.

BOSA then had the majority of chances after that opening from Arsenal. Brian Murphy and Mateo Leach linked up for a quick combination near the top of the box, which sent Murphy in on goal, but Arsenal goalkeeper Nicholas Pavez made a good save to keep it out.

Two injuries in the first half led to seven minutes of stoppage time, which is when BOSA found its break.

A mistake from an Arsenal defender led to a breakaway for Gabe Segal. The U.S. Youth National Team forward pushed the ball ahead and was off to the races. Segal picked out his spot in the goal and put it away for the opening tally right before the break.

Seconds into the second half, BOSA went up 2-0. Aidan Rocha’s free kick service was put into the back of the net via a sliding finish from Murphy.

Minutes later, Rocha nearly had his second assists of the second half when his free kick landed inside the six, but Segal’s finish went wide of the post.

However, BOSA redid the same scenario in the 54th minute and this time Segal’s header went into the net.

John Engerman nabbed the final goal of the game for BOSA when an Arsenal defender did not put enough gas on his header back to the goalkeeper and Engerman lifted his shot over the keeper and into the net.

Arsenal pulled one back late via the finish from Garcia, but it was too little, too late for the squad from Southern California. Arsenal (1-1) finishes out the event on Monday against St. Louis Scott Gallagher Missouri (1-1). Bethesda-Olney (2-0) is trying to close out a perfect record in Indiana with a game against San Juan Soccer Club (0-2) on Monday.