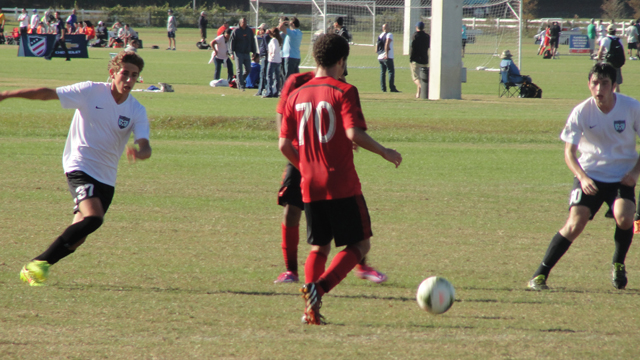 LAKEWOOD RANCH, FLORIDA – The 2014 Development Academy Winter Showcase wrapped up on Wednesday with the U15/16 age group closing down the event at the Premier Sports Campus.

With all of the games kicking off at either 9 a.m. or 11 a.m., there was a lot of action happening at the same time on the fields.

The Timbers came out with the mentality to dictate the game early and the MLS academy accomplished that on Wednesday. Portland took the lead in the seventh minute when Jose Peralta played it out to the left channel for Blake Bodily. The left winger whipped in a cross to the far post that Adrian Villegas finished.

Weston was still sluggishly going through the motions of the game through 20 minutes when the Florida club was dealt a tough blow. Left back Gregorio Ibanez was sent off after a harsh challenge near the benches.

Down a goal and down a man, Weston had to chase the game and tried to hit the Timbers with quick, direct passing sequence. Timbers weathered the storm in the first half and doubled the lead 14 minutes before the break.

Jose ‘Pepsi’ Perez supplied the service that Villegas put into the net for his second goal of the game.

The Timbers were buzzing and the ball was pinging through the midfield with the two-goal advantage. Terrell Lowe and Peralta dictated the pace of the game and Villegas supplied the release valve to get the team out of trouble whenever Weston tried to trap.

Timbers put the final touches on a stellar opening half with Perez’s goal in the 30th minute. Perez’s diving header found the back of the net after a cross from left back Marco Farfan picked out the forward in the box.

Weston grabbed one goal back later, but the Timbers nabbed the 3-1 win and finished the event with a 3-0 record with 10 goals scored and three conceded.

D.C. United and Real So Cal exchanged goals in the first half as both teams searched to end the week with a victory.

D.C. United, despite playing without defenders Carson Jeffris and Jairo Funez who sat out due to red cards in the previous game, had majority of the ball early in the second half with both teams searching for the go-ahead goal. The MLS academy pushed the Real So Cal in the midfielder, but could not break down the final line of the defense.

D.C. United did find the game-winner midway through the second half when Raheem Lawal held off the last defender for Real So Cal and then tucked his shot under the legs of the goalkeeper.

Real So Cal pushed numbers forward late, but D.C. United defense did well to keep any clean shots from getting through to the goalkeeper.

D.C. United ended the week with two wins and a loss.

Ethan Zubak drew a penalty kick, a red card, scored a goal, and had an assist in one of the most dominant individual performances from the week in Florida.

LA Galaxy and St. Louis Scott Gallagher played to a scoreless draw in the first half before the MLS academy opened up the Gallagher defense midway through the second half.

Galaxy relied on the speed of Zubak for the opening goal. The winger, who featured on Monday at the Academy Select game, sped past the Scott Gallagher defense after a long ball forward that he took in stride. Zubak cut in toward goal from the left wing, which led to defender Matteo Kidd trying to slide tackle him from behind.

Kidd was sent off and Galaxy was awarded a penalty kick. Zubak sent the keeper the wrong way and put the ball in the back of the net.

In the dying moments of the game, Zubak helped put the contest out of reach with a similar type of play. The winger went to the right side of the field this time and beat his mark on the dribble before passing it off for Kevin Negrete for the finish.

Galaxy ended the result with a 2-1 record after losing 0-1 to D.C. United in the opening game on Sunday.

St. Louis Scott Gallagher Metro finished the event with an undefeated record after defeating Chivas USA on Wednesday. The Mid-America Division squad notched a goal in the first half and held on against Chivas USA late.

The Los Angeles Academy battled hard late with most of the ball in the attacking half, but the finishing touch was not there on the day and Scott Gallagher’s net remained clean.