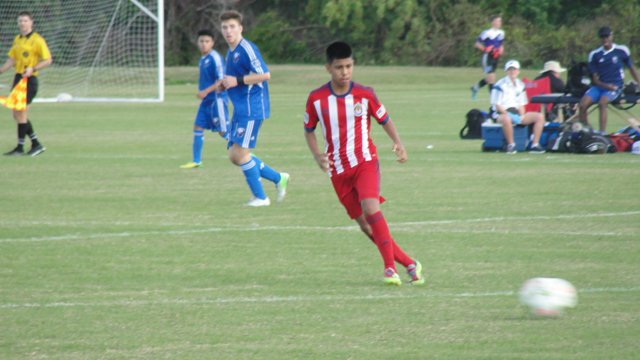 LAKEWOOD RANCH, FLORIDA — The 2014 Development Academy Showcase rolled into its second day of action on Sunday with the U15/16 age group getting its first taste of the competition.

Dallas Texans held strong in the first half against a star-studded Georgia United side. Texans goalkeeper Carson Williams came up with a good save in the 29th minute to keep it scoreless in the first half as the teams exchanged chances, but neither really showed much of a finishing product.

Georgia United looked to the bench for reinforcements at halftime with youth national team players Juan Pablo Torres and Andrew Carleton coming on at the start of the second half.

Georgia United broke through four minutes into the second half when center back Andrewas Jackson headed home a corner kick from Diego Manrique. Jackson rose above his mark and directed the corner kick into the far corner for the opening goal.

Texans kept it close though and started to ask questions of the Georgia United defense. In the 58th minute, Texans strung together a delightful passing sequence and wonderful choreographed move from the right side of the field to the left. Left back Patricio Garcia was at the end of the movement and free on goal. He played a square pass to forward Malik Key, but the youngster missed the frame on his shot.

Okonkwo nearly had his second of the game in the dying moments when Qur’an Thomas tried to pick out his Okonkwo’s run on the far post, but the forward could not get his toe on it and the ball rolled out for a goal kick.

Georgia United ran its unbeaten streak to four games with the result.

The first half of the Chivas USA – Montreal Impact game was known more for Matthew Huerta being offside than any other action on the field. Huerta and the other Chivas USA attackers kept the assistant referee busy in the first half, which resulted in more than a dozen offside calls in the first 40 minutes of the game. With the frequency of whistles, there were limited opportunities at either end of the field.

Chivas USA goalkeeper Edwyn Gutierrez did make two good saves on the few times he was called upon early in the game.

Leonides Cuteno had the best chance for Chivas USA when he raced past the Impact defense and tried his luck from a tough angle. Impact goalkeeper Charles Desrochers made the save, but left a rebound Oscar Penate. Descrochers completed the double save on the second shot to keep it scoreless.

Impact broke through late in the second half with Protais Mutambala starting the play. Mutambala passed it forward to Luca Piccioli who turned and crossed it back to Mutambala. The winger pushed it wide to Esleyder Luarca for the finish.

Chivas USA answered the call with one minute left. Cuteno was sent in behind the defense and tried to dribble around the goalkeeper, but he was tripped up. The referee awarded a penalty kick, which Daniel Villegas converted.

Seconds later, Misael Becerra was in a similar situation with an opportunity on goal after getting behind the defense. Becerra couldn’t convert the chance and the two teams settled for a 1-1 draw.

Renato Albuquerque was hacked down after 20 yards from goal after 17 minutes to step up the opening goal. Josiah Veloz ripped the free kick into the upper corner of the net.

Benjamin Noel tried to answer immediately for Empire Revolution with a shot from just outside the box. John Achor made a great diving save to push the shot over the crossbar.

Albuquerque was again in the midst of the attack in the 28th minute. The winger was running at the Empire defense and then slipped in Benson Sakala in between the two center backs. Sakala smashed his shot past the goalkeeper and into the net.

However, Matthew McCraith had other ideas. McCraith raced past the Magic defense with five mintues left in the game before he was hacked down. McCraith converted the penalty kick.

Adnan Bakalovic put the teams back on level footing early in the second half. Empire benefitted from a turnover by the Magic goalkeeper. Noel intercepted the pass and played it off to Bakalovic who put it away.

With nine minutes left in the game, Magic regained the lead. Aleksander Prpa delievered the corner kick that Amit Tal headed in.

Seconds later, Empire answered. Bakalovic hit the first shot that the Magic goalkeeper could not hold onto. Andrew Craford was there for the rebound for his first goal of the season and the game-tying goal.