See all of our commitments - Boys | Girls

Vince Cicciarelli is keeping it in the family.

The St. Louis Scott Gallagher Metro striker has chosen to attend Notre Dame next fall, in part, because of tradition.

“My grandfather, two of my aunts and one of my uncles have all gone there,” Cicciarelli said. “It’s the best fit for me.”

Cicciarelli, who has four goals in five games for his Development Academy squad which is on break, plans to study engineering and help the Fighting Irish fight it out in the Big East.

Current teammate and defender Sam Fink has decided to take his talents to Wake Forest. 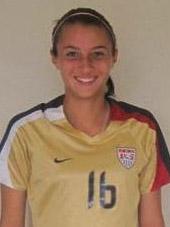 Kodi Lavrusky
“They are one of the top programs in the country,” Fink said. “I believe going to Wake will best prepare me for my future, whether it be with soccer, or in the work force aside from professional athletics..”

David Abidor (Shattuck St. Marys Academy), who will be in the Atlantic 10 next year, joining Dayton. He says he was drawn to the up-and-coming roster.

Santiago Velez, off to a good start this season with Real Colorado, has committed to Ohio State.

Marques Mayoras (Kansas City Wizards) is on his way to Ohio State.

On the girls side:

Kodi Lavrusky, the No. 23 player on our 2012 Top 100 list, decided Monday that she will be taking her talents to Stanford in a couple years. As mentioned in last week’s commitment edition, Stanford is cleaning house when it comes to the 2012 class. Among the nationally recognized players who will be joining her in 2012, include: Maya Theuer, Haley Washburn and Sarah Cox.

Kristen McNabb, a 2012 graduate from PDA, will be heading to Virginia.

Jackie Simpson, a 2012 graduate from Brandon FC, is going to South Florida.

Solar SC standout Heather Magee, also a 2012 graduate, will be playing her college soccer at LSU.

Kaylie Davidson (So Cal Blues) is heading to Navy.