Comments
The U.S. Soccer Development Academy has brought the country’s top talent together, so when a small state like New Jersey has four Academy teams, it’s easy to find the best players. But the hard part is narrowing a huge list down to a select few.

While Academy teams dominate this list, there were still some surprises that snuck on.

Scott Thomsen of PDA is a central midfielder with great composure on the ball, decision-making and the ability to serve balls accurately over distance. He sees things before they happen, and succeeds by relying more on his intelligence than athleticism.

Jacob Schenk is an up-and-coming goalkeeper with good size and total control of the goal area. He is starting to gain a real presence in the air, and has the ability to win high balls on crosses over most attacking players. 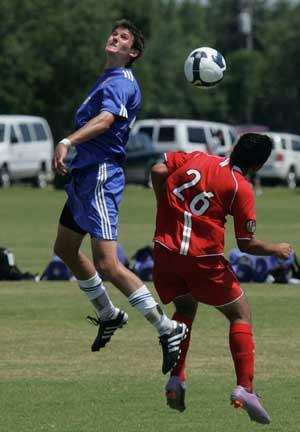 Match Fit Chelsea (blue) competes.
Connor Ventura is a forward with good speed and strength, tenacity and a nose for the goal. He was sidelined for the majority of the 2009-10 season, but when healthy he is a great attacking asset on the front line.

Mael Corboz of NJSA 04 is an attacking midfielder with excellent vision, ball-skills and finishing abilities. He’s creates a mismatch against any defense.

Jon-Luke Ferrandino is a left-footed withdrawn striker, a technically gifted roamer who creates danger by holding the ball up, crossing and finishing every chance he gets.

Nigel Joseph is a winger with speed and an incredible work rate, attacking and tracking up and down the field. While not as technical as some of his teammates, he is developing quickly and has yet to unearth loads of potential.

Josh Toribio is a left-footed center back with great pace and ball skills. He’s a strong tackler and excels at distributing and initiating the attack out of the back.

Cory Atanda is a tough, aggressive midfielder who excels at doing the dirty work in the middle of the field. But he’s a balanced player whose offensive skills are quickly catching up with his defensive exploits.

Michael Czyrnek is a winger/central midfielder who is very technical on ball, good in the air and has excellent vision to distribute the ball all over the field.

Brandon Allen, formerly of PDA but joining New York Red Bulls this summer, is a forward with an uncanny ability to find himself in front of goal, as evidenced by his amazing tally of 25 goals (in 27 games) last season.

Bolu Akinyode is a tall and wiry holding midfielder who breaks up plays on the defensive end and connects very well with teammates to generate the attack.

Maximillan Brown is a goalkeeper mastering the tricks of the trade, with very good shot-blocking abilities and the footwork to distribute the ball out of the back. He provides his team the luxury of almost having another distributor on the back line.

Jameson Lochhead of Match Fit Chelsea is a skillful center back with good size, quickness and strength in the air who loves to get forward and is very dangerous on set pieces. He’s currently receiving looks from Division I schools in the Big East.

Rui Pinhero is a developmental central midfielder with great speed and technical ability. He wasn’t quite ready to perform at the Academy level last season, but showed the potential to soon develop into a star.

Sonimi Holiday of Marlton SC is a center back with good quickness, tackling ability and all-around ball-skills. He’s a wall on defense and a springboard for the attack.

Michael Ryan is an attacking central midfielder with excellent vision and the right weight on all his passes. He creates plays and scores goals in equal measure.

Greg Bigiani is a 6’4” center forward with a great first touch and the ability to turn on a dime, shoot and score from close range or distance.

Richie Angaro is a goalkeeper with good size and natural shot-blocking abilities with good distribution and total control of his box.