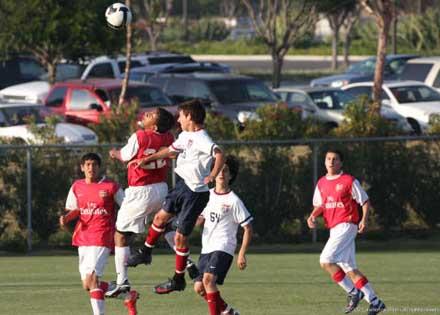 U15 Boys National Team coach Jim Barlow appears to be creating good problems for himself.

The squad, which just completed a week-long camp in Bradenton, FL, is experiencing a certain amount of turnover from camp-to-camp, largely because it keeps graduating players to the U17 Men’s National Team residency program, also in Bradenton. This is good as it indicates good evaluation and development by the program (as well as by the club programs that work with the players daily), but it means the team could be at a competitive disadvantage in its outings as new players are continually being blended in.

“We were a bit concerned that we had lost so many guys from our last camp (in December) who had been invited into residency. We didn’t know what it would look like this time,” Barlow, also the head coach at Princeton, said. “It turned out to be a very good week. Some of the new guys showed well and we’re excited about this group. It can be a good age group.” 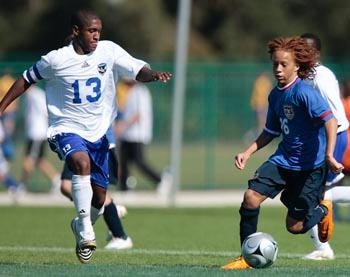 Miguel Polley (right)
The camp taking place in Bradenton is no accident, and points to increased integration among the youth national teams.

“The last couple of camps we’ve worked closely with Wilmer. We know his staff is putting pieces together at the early stages for the next U17 World Cup (to be held in 2011),” Barlow said. “The 95s can be an important piece of that. His staff wants the chance to be close to and evaluate the 95s, plus to have them compete against their current group is a good way to gauge where our guys are and also how their guys are doing. It also gives our guys a chance to see what day to day life is like in residency, which is helpful as well.”

Barlow said the two matches his team played with the U17s had distinct looks. Former U15 player Zach Pfeffer scored early and the tally held up for the 17s.

“The first time we lost 1-0, and it was a good even game. We had some good chances in that game and so did they,” Barlow said. “I thought in the 1st half the residency team carried play, but we turned it around in the 2nd half.”

A mostly new lineup greeted the 15s in the return match, defeated Barlow’s squad 2-0 via goals in each half, including a late penalty. Barlow was pleased with his team’s effort and the learning experience.

“One thing I liked about those matches is that they were not all about athleticism, which we get in a lot of games we play vs. older teams,” he added. “They presented a lot of soccer challenges and our guys handled the challenges well.”

“A bunch of guys did well, but those two new guys and all of our goalkeepers stood out,” he said.

The 15s next trip is likely an international trip to Argentina in May, although this has yet to be confirmed.