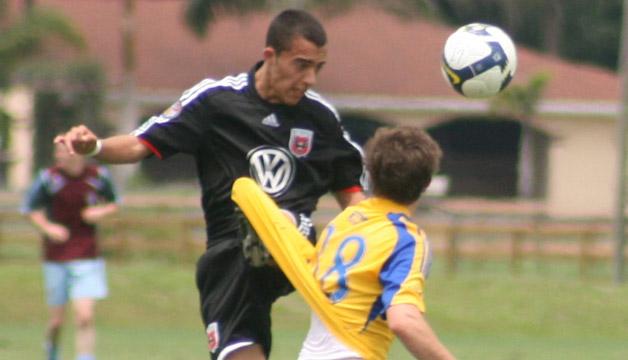 College Park, MD – On an unseasonably warm afternoon, the U18 Academy teams from DC United and Albertson SC tied 1-1 on the campus of the University of Maryland.  It almost seemed liked a coaching conference given the numerous coaches taking in the action including staff members from Maryland, Duke, James Madison, Georgetown, George Mason and Princeton.

DC United, with a weakened defense because of disciplinary action, gave away two points. While Albertson SC had a legitimate claim to the game (especially in the first half), they were unable to convert their chances and the eventual draw was fortuitous for the Long Island side.

Much of the game was uneventful, because of sloppy play by both teams for long periods in the second half.

Albertson SC: 4-3-3. They use a target forward with two withdrawn forwards on either side of the target.  The midfield uses 2 DM and an advanced 2- way midfielder.  Think of it as 2 chevrons or 2 flat DM and a diamond on top of them.

Albertson SC scored a late goal from a penalty kick.  It was a legitimate hand-ball in the box. The play started with Jake Scavetta driving in a 30 yard free kick that DC United Lester Dewee handled. Timothy Parker (St. John’s recruit) hit the penalty kick.

Dakota Edwards who is a Maryland verbal, severely injured his shoulder on the previous day and he may be recovering for a very long time.

Goalkeeper Daniel Scheck is not an imposing force in his box.

Before Keith McKenna (Stony Brook) apparently broke his finger, he was the best attacking option for Albertson SC.  McKenna injured his finger on a long free kick from Jake Butwin (Duke) that McKenna headed onto goal – he must have jammed his finger into a DC United defender in the first half.  He did not return.

Butwin motors around the field with abandon and energy.  He’s accurate on his corner kicks.

In the second half, Colin Heffron (Dartmouth) was pushed into the target forward position.  He was able to get behind the defense and head a ball past DC United goalkeeper Alec Dockser, but the ball was cleared off the line by Bradley Vorv. Heffron is a powerful player who is unafraid of being physical.  On another play, Heffron slotted a goal, but it was pulled out of the net because Heffron was called for a pushing infraction against DC United’s Jalen Robinson.

Parker is a big defender, but he needs to improve his touch – it’s imprecise.

Manual Montanez is better on the ball than Parker.  He’s confident to send long balls down the flanks.  One of these found Hancell Guevara that led to a dangerous cross.  Montanez is a good defender, as well.

Marcus Salandy-Defour scored the DC United goal from a Myles McGinley corner kick.  Salandy-Defour beat his defender to the spot and struck the ball out of the air with his right foot into the near post.  Nice goal.

Marcus Salandy-Defour
Salandy-Defour was the best DC United attacking option, continuously finding space to receive the ball.  In the second half, he drove into the box with 2 defenders covering him, earning a corner kick.  He’s a confident dribbler.

The person that had the biggest impact in the result was Dallas Aminzadeh (Wake Forest).  He’s a terrific defender – easily the best on the DC United team – but he needs to control his emotions.  In the 2 DC United games that I have seen this spring, Aminzadeh has picked up a card in each game including a red in this match, because of his lack of emotional control.

The red card play started with Albertson SC Michael Lobben rashly fouling Myles McGinley near midfield – deserving a yellow card on the play.  While DC United players weren’t happy with the tackle, Aminzadeh came flying in from the back and ran into Lobben inciting a fracas between the two teams.  After conferring, the referee awarded a red card to Aminzadeh and Lobben.  Lobben may have reacted after the Aminzadeh collision, but I didn’t see anything, but I could have missed it.  I’m confident that Wake coach Jay Vidovich will not put up with these types of shenanigans from Aminzadeh in the fall.

Marco Hurtado was ejected late in the game on a bad tackle.  Before this, he was effective in the back, but he needs to be aware of deep runners coming in behind him.

Bradley Vorv saved a goal clearing a ball off the line after the ball got past the goalkeeper and was bounding into the goal.

Watching Cody Albrecht (St. John's) play is a pleasure.  He calmly handles passes and quickly moves the ball to his appropriate teammates.  Albrecht makes DC United more cohesive.  He’s already quite good.  Though there is nothing that he do about his primary deficiency, his height might impact his future prospects – but he’s doing everything in his power to be successful.  When Albrecht plays against professionals (like he did against the Columbus Crew reserves), his size is even more apparent.

DC United got better when Iyassu Bekele was inserted in the second half.  Bekele served a diagonal to Albrecht who brought the ball down quickly off his chest to Salandy-Defour who beat Albertson SC’s defender Slotnick, but was denied additional territory by Montanez.
Related: Players To Watch,