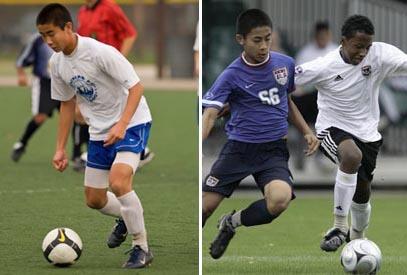 A pair of brothers in the Chicago area could be moving toward some great things in and for American soccer.

A combination of skill, strength, brains, heart, and yes, humility, leave Sockers FC standouts Andrew Chang and Michael Chang looking like two of the brighter prospects in the youth national team system. While any players aged 15 and 13 have to be treated with a certain wait-and-see approach, both have made a good impression with their respective YNT cycles, Andrew with the 94s (U15 BNT) and Michael with the 95s (U14 BNT).

Their father Joe recalls that the two started out like most players, in the local recreational league.

“They were like most kids, they started in kindergarten with AYSO,” he said. “Andrew started first and at that age we had them play a few different sports, but they ended up focusing on soccer.”

The brothers started travel soccer near the family home with Chicago Wind, and switched to Sockers two seasons ago. In successive years, Andrew and Michael went to the U.S. Soccer National ID Camp in Concord, MA, under the direction of Manny Schellscheidt and made the national pool. Andrew has stayed in the national squad since and will be with the U15 BNT next month in Bradenton, FL, for a camp with head coach Jim Barlow. Michael just returned home from the U14 BNT’s trip to Mexico and matches against, among others, Chivas de Guadalajara. 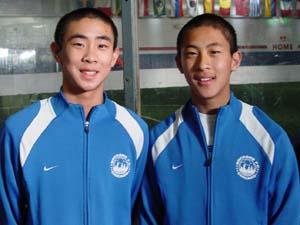 Andrew (left) and Michael Chang.
“It was a great experience, being out of the country for a while and getting to know my teammates better,” Michael said. “It was different to play against them. They played the ball around more and kept it better. Everything was faster and they made it kind of hard to break up plays.”

Michael and Andrew both play defender for their respective national teams, but Michael is a central midfielder for the Sockers U13s and Andrew is playing some defender and a lot of forward with the U15s, although he has been training all season with the club’s U16 Academy team and may still turn out for them this spring.

“I think it’s been a lot of help to train with the older guys,” Andrew said of his experience in Sockers Top Talent Program. “I can’t get away with a lot of stuff than I could if I was playing with players my age. It’s a lot of fun and the coaches are helping me out.”

Andrew, who played defense for his club team through before last season, believes he is adapting to the offensive position.

“I’m more comfortable playing defense but I like playing forward,” he said. “I want to keep working on it. I think I’m pretty good at holding the ball and laying it off, but I need to work on attacking more.”

Andrew is under the tutelage of Sockers’ director of coaching David Richardson and U15 team coach Oleg Vatchev. Michael is coached by U13 mentor Achmed Gad, who has him playing as a central midfielder.

“He’s strong, but also a very smart player,” Gad said of Michael. “He has a great heart and is a hard worker. It’s not just his body, but his technical skills and his tactical ability. He’s a smart kid and always learning. He comes to practice willing to learn and that’s why he is so good.

“Michael can play any position in the middle,” Gad continued. “He can tackle the ball. He’s good at 1v1 attacking and good with his right and left foot. We can give him the freedom to move up when we attack. He has the ability to finish from distance.”

Andrew said he and Michael, who share an admiration for Barcelona star Lionel Messi, help each other develop by playing and working out together.

“Me and my brother practice on our own. We’re juggling and doing 1 on 1s, and trapping,” he said. “We have some things alike but he has more power and strength and likes to attack. I’m more the quicker and defensive kind of player.”

Joe Chang said that he and his wife Maria, plus younger sister Jillian, are enjoying watching the boys grow up on the soccer field. He agrees with the boys that they end up helping one another develop.

“They are competitive, but they respect each other. They are different styles of player but they both like to win,” he said. “I think it helped Michael that Andrew had a lot of success first at the state, regional and national level. It gave Michael some motivation, but Michael loves soccer independently, so that is a happy thing too.”