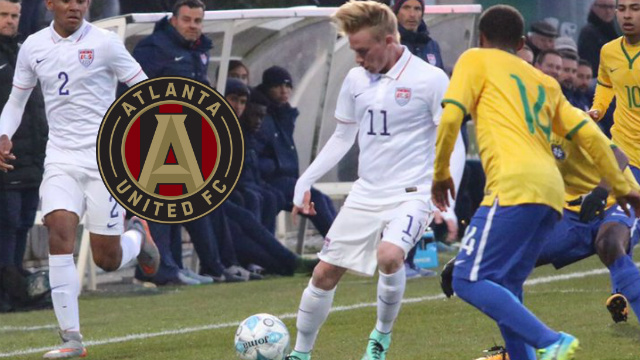 Carleton, who is currently part of the U17 Residency Program in Florida, will join the team in 2017 after completing the required Homegrown Player training requirements ahead of Atlanta's debut season in Major League Soccer. The Powder Springs, Ga. native will be the team's first Homegrown signing in its history.

“We’re excited to welcome Andrew to the club,” Atlanta United technical director Carlos Bocanegra said in a statement. “He’s an outstanding young talent with strong ties to Georgia soccer so we’re very proud to name him the first homegrown player in club history. Andrew has been a mainstay with the U.S. Youth National Teams from a young age and we look forward to watching him develop as a professional.”

A midfielder/forward for Georgia United in the Development Academy, Carleton has extensive youth national team experience at the U14, U15 and U17 age groups. Earlier this year, Atlanta United announced it would be joining the DA at the U16 and U18 age groups in Georgia United's place. Despite missing most of the 2015-16 season, Carleton did manage to score five goals in 12 appearances for Georgia's U18 team. He helped the U16s clinch a spot in the National Semifinals last summer as well.

An attack-minded player who can line up in a variety of different roles in the final third, Carleton's demonstrated the ability to both score and create from wide areas and providing attacking thrust up front.

Over the past two years, Carleton has enjoyed standout shifts for the U.S., recently performing well at the AIFF Youth Cup in India, where the U.S. finished as runners-up to South Korea and scoring in two friendlies against Canada. In 2015, he scored six goals, including two times in the final, leading the U15 BNT to the Tournament delle Nazioni title in Italy last spring.

“As a new club coming into the league, it’s critical that we build a strong foundation with young, talented players from our home territory,” Atlanta United president Darren Eales said in a statement. “Andrew is a great example of the deep talent pool we have to draw from in Georgia. We’ve been very impressed with his athletic ability as well as his character off the field.”