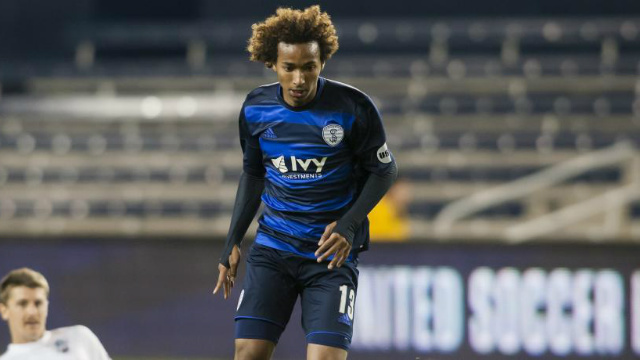 That’s all it took for Gianluca Busio, on his pro debut, to leave an impact in his very first game.

Playing as the No. 10, Busio slipped into space, took an entry pass from the left wing, turned nicely and played in Tyler Blackwood, who did the rest.

Not a bad sequence to get things started for @SwopeRangers!#SPRvCOS pic.twitter.com/nVyO09osVq

That goal proved to be enough during last week’s win. And it was just the tip of the iceberg for Busio, making his first professional start at just 15 years old. He didn’t look out of place on the field before coming off in the 77th minute, completing 94% of his passes, though most were simple balls to recycle or retain possession. Busio handled corner kick duties, and finished his debut with three chances created.

Head coach Pablo Nagamura had plenty of praise for him after last week's match.

"I thought he did very well," Nagamura said after the game. "Not many people know that the kid is 15 years old and he has tremendous qualities. It is not easy to put a 15 year old in a professional match and do well. He handled himself really well during the game. He gave a great pass to Tyler on the first goal. I was really pleased with his performance."

Also making his first start for Swope Park Rangers in that game was right back Jaylin Lindsey. Another Academy signee, the U.S. U17 MNT World Cup veteran went the full 90, and while he didn’t engineer any goals, Lindsey had a great game. The dynamic right back bombed up and down the flank, looking to get forward and involved on more than one occasion. Lindsey did get beat during a couple of moments in the second half, though he recovered quickly before Colorado managed to get into a dangerous position.

Wednesday’s game wasn’t Busio’s only match of the week either. He returned to the starting lineup for Saturday’s clash, a 1-1 draw against San Antonio. His numbers dropped in this one, completing 33 passes with just 73% accuracy, losing eight of the 13 duels he was involved in. Regardless, the experience is invaluable at this stage of his career.

Lindsey, on the other hand, made the trip to LA on Sunday for Sporting KC’s 2-0 win against the Galaxy. The right back’s MLS debut can’t be too far away, though he was an unused sub in that affair.

Plenty of digital ink has been spilled about the promising catchment of homegrown players in Atlanta. Whether it’s Andrew Carleton, Christopher Goslin or George Bello excelling on his pro debut, there’s plenty to look forward to in the ATL.

However, overlooked in all of this – and well overshadowed by fellow 2017 draft pick Julian Gressel – is center back Miles Robinson.

The former Syracuse defender finally got his MLS chance last weekend, as a suspension to Leandro Gonzalez Pirez saw Robinson slot into the starting lineup against LAFC on Saturday.

After two appearances for Atlanta United 2 earlier in the season, Robinson hardly put a foot wrong in a 90-minutes stint, a 5-0 win for United against the newest MLS franchise. While the game ended up as a blow out, he was active in the early moments, making a nice block of a first-half chance from Latif Blessing on the doorstep.

And his action chart below provides interesting analysis. Robinson defended deep for most of the game, and while his passing was relatively simple, there wasn’t a lot of side-to-side action in the team’s back three. “[Robinson] did a great job defensively, but I think the game was set up for him to succeed today in a sense that we were playing further back and forced to defend, and he’s an excellent defender,” Martino said through a translator in his post-game press conference.

So against a more pro-active opponent, does Robinson get another chance? Martino’s track record with Atlanta’s domestic talent has been notable, for lack of a better term. And even if Robinson is back to the bench next time out, he made the most of his opportunity at this point to get another chance at some point in 2018.

While Justen Glad is the most recognized domestic youngster on Real Salt Lake, it was two others that earned acclaim from the weekend’s 2-1 win.

With Tony Beltran out for the bulk of the season, U.S. youth international Brooks Lennon has been deployed as a right back in the past few games.

Given that he progressed through RSL’s Academy as a prodigious goal scorer, Lennon’s swap to the back has come with its share of ups and downs.

In RSL’s much-needed win over the Vancouver Whitecaps, Lennon helps engineer the game’s first goal. Getting forward on the right side, he found teammate Luis Silva at the top of the box, and Silva did the rest to put RSL in front.

Lennon was caught napping in stoppage time, when Brek Shea slipped in behind to claim Kei Kamara’s knockdown, cutting into RSL’s lead. The mistake didn’t deter the result, and it’s an understandable error for a converted attacker to make. More notably, going up on the same flank as Whitecaps prodigy Alphonso Davies, Lennon held his own.

The three-time national champion at Stanford put in a solid 90-minute shift on the left side. It’s hard to know if he was expected to play the entire match, though it became the most likely outcome when RSL was forced into making two substitutions in the first half.

Baird completed just 11 of 16 passes, as he leaned into what he did best with the Cardinal: cover ground, press the opposition and create space with and without the ball. He even picked up an assist on the game winning goal, beating Kendall Waston in behind, crossing to find Jefferson Saravino for RSL’s second of the game.

A pair of first-year standouts notched debut goals over the weekend.

Nashville SC’s Alan Winn took advantage of a defender losing his footing in the first half, eventually slotting in the opening goal in his side’s 2-0 win.

The former North Carolina star and U.S. youth international was drafted in the second round by the Colorado Rapids, though he jumped at the opportunity to join the soon-to-be MLS franchise. Making a second professional start on Saturday, Winn controlled a long ball, dribbled into the box and found the far corner of the goal with a nice, low left-foot strike.

Going forward, Winn should remain a fixture in the Nashville SC starting lineup as the USL side continues its first season in the league.

Winn wasn’t the only 2017 college star finding the back of the net. Orlando City SC forward Christopher Mueller’s glancing header (it had some help, of course) jump started the home side’s 3-2 come-from-behind victory against the Portland Timbers.

While there may not be room to dig into specifics, a number of academy players earned starts in USL play around the country.

With Miles Robinson starting in MLS, Kendall Edwards started at center back for Atlanta United 2. The NC State played 90 minutes in a 1-1 draw on Sunday against Penn FC.

LA Galaxy II had two players sent off in a 3-0 loss to regional foes Orange County SC. The Galaxy did start two of its most promising academy players, with Ulysses Llanez and Alex Mendez getting the nod. Unfortunately, Mendez picked up a second half red card that reduced LAII to nine men.

Both Jake Morris and Dylan Teves came off the bench for Sounders 2, as they lost 1-0 against the Sacramento Republic on Saturday. Like LAII, Seattle picked up two red cards. Teves has appeared in all four S2 matches so far this year, starting in three of them.