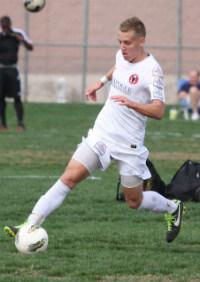 The prominence of New Mexico and its location gives them the advantage when trying to attract the top players from states nearby.

It also meant that Sam Gleadle didn’t have to look very far – at least in comparison – when searching for his new college home.

“UNM is a highly respected DI school and has everything I was looking for both in soccer program and in my educational needs,” he told TopDrawerSoccer.com. “The coaches showed a huge interest watching me play in many tournaments and have been communicating with me through most of my junior year.  After an unofficial trip with my family to UNM my mind was made up.”

Jeremy Fishbein, who has done wonders while overseeing the rise of the Lobos, definitely put in the work to land Gleadle, as the recruit viewed the program in very high esteem.

“After visiting New Mexico and meeting Coach Fishbein, his assistants and the team I was impressed by the skill and commitment of the players,” he said. “The roster is full of great players they know there is always room for improvement and trained at 120% every practice session. The athletic facilities are second to none and with a fantastic opportunity to play with teammates from all over the world I knew that UNM was for me."

The decision to not stray out of his home state wasn’t easy, but Kamron Crow felt that San Francisco checked all the boxes when it came to searching for the right college fit.

“I decided to commit to USF because of the three aspects USF has to offer that I think are the most important when involved in the recruiting process,” Crow told TopDrawerSoccer.com. “Those are the soccer component, of course, the school aspect, and the social aspect. The attitude, mindset, goals, style, and experience of the coaching staff, prominent academics USF has to offer as well as the diverse and fun-filled city of San Francisco all collectively convinced me that I have everything I need at this University to excel both on and off the field in my future college career.

Time and time again, players always want to find a team that plays similar to their current club team, as it can make for an easier transition on the field. That’s what Crow found out from observing USF.

“What I liked most about their soccer program was their style of play that is very similar to my Academy's style of play, which in return caught my attention quickl,” he said. “Also, the long term goals and expectations of the coaching staff and where the soccer program is headed in the future of the school and what they are trying to accomplish in the years to come is something I could not pass up.”

An attack-oriented player who enjoys taking on opposing defenders one-v-one, Tuvesson didn’t overthink anything when it came to picking a college.

“Out of all the schools I talked with, Lehigh felt like it would be the best place for me for four years of my life,” he said. “I really enjoyed all aspects of it and felt I would be very comfortable there and would really enjoy myself."

Midfielder Ben Roth (PDA) committed to St. John's for the class of 2014.

Defender Louis Plascencia (Michigan Jaguars) committed to Michigan State for the class of 2014.

Midfielder Rony Zino (Albertson SC) committed to Siena College for the class of 2014.