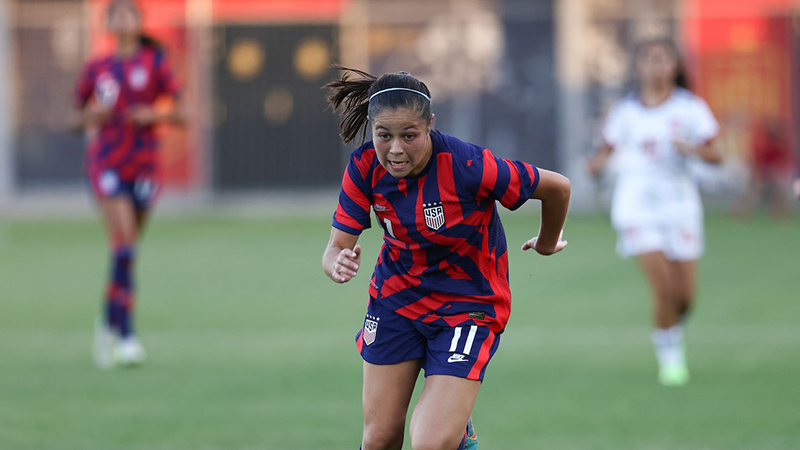 U.S. Under-17 Women’s Youth National Team head coach Natalia Astrain has named the 21 players who will represent the United States at the 2022 FIFA Under-17 Women’s World Cup to be held in India from Oct. 11-30.

Astrain named the final roster after a successful three-game trip to Spain at the end of August in which the USA won and drew with Spain and then defeated Germany. Due to the global pandemic, this group of players didn’t return to international play until late April of this year at the Concacaf Women’s U-17 Championship in the Dominican Republic, a tournament in which the USA won all seven of its games to qualify for the World Cup and take the regional title.

“I give a lot of credit to players for how much this group has grown in a short time,” said Astrain. “They are a very united team, not only in their dedication to playing our style of soccer on the field, but in supporting each other off the field. They are a team full of positive spirit and competitiveness, and the opportunity to represent the USA in a World Cup is one they are embracing with humbleness and tremendous excitement. We are really looking forward to seeing the positive impact this World Cup will have on their developmental journeys.”

Astrain named 15 players who were part of the USA’s Concacaf championship team (in part due to a few injuries late in the selection process) and six players who made late runs to earn a World Cup roster spot. This will be the first U-17 Women’s World Cup since 2018 after the 2020 tournament was cancelled due to the global pandemic and thus the first World Cup experience for every player on the roster.

The tournament will be a truly special experience for midfielder Mia Bhuta, whose father was born in Mumbai and grew up in Rajkot in the state of Gujarat in Western India. He came to the USA when he was 16 years old and now his daughter, the first-ever player of Indian descent to represent the U.S. Women’s National Team in a World Cup, will get to do so in a country in which she still has many relatives.

The 2022 FIFA U-17 Women’s World Cup features 16 nations divided into four groups of four teams. The top two finishers in each group advance to the knockout round quarterfinals. All 32 matches of the tournament will take place across three venues in India: Kalinga Stadium in Bhubaneswar on the east coast and Pandit Jawaharlal Nehru Stadium in Goa and DY Patil Stadium in Navi Mumbai, which are located on the west coast.