Atlanta has extensive plans for Carleton 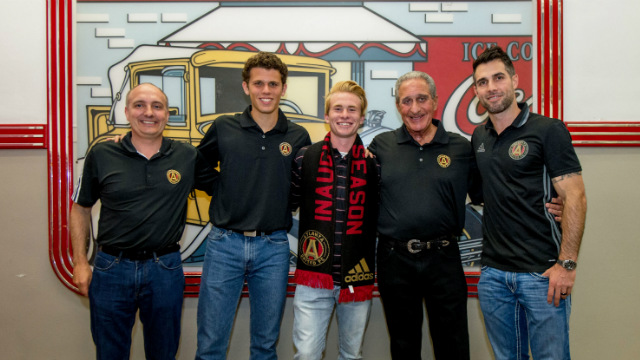 Thursday’s announcement of Atlanta United signing U.S. youth midfielder Andrew Carleton to a homegrown contract marked the end of a six-month process between the player, family and MLS franchise.

It also signals the start of a new, more complex and difficult journey. One that hopefully turns an electric, 15-year-old attacker into a professional soccer player that can excel and contribute for his hometown club.

A standout cornerstone on the U.S. U17 men’s national team, Thursday’s announcement came with lofty ambitions of helping one of the best youth players in the nation grow his game.

“We felt like the timing was right because he’s a special talent, and we wanted to accelerate his games, program and his development to a professional level,” Atlanta Technical Director Carlos Bocanegra told TopDrawerSoccer. “You see it around the world that players are getting in environment or signing contracts at a young age, and they push them through and are creating stars, top players around the world. For us, that was our goal.”

Bocanegra scouted Carleton well beyond the six months of discussions, raving about the attacking qualities that he brings to the field.

“He’s very creative and he can see the final pass, which is special,” Bocanegra said. “He has good vision with that, but he can create on his own and score goals. He’s a guy that we felt it was time to push him, he’s one of the elite players in the youth national team level, let’s accelerate his growth, let’s accelerate his process. And by signing a homegrown contract, he’d be able to do that."

Player development and Major League Soccer have a complicated relationship. Systems around the world jettison nascent talents for a variety of reasons, though on the surface, teenage stars have oftentimes lacked opportunities and the resources (namely playing time) to turn raw tools into consistent performances in the North American league. No system has a 100 percent record of pushing players through, of course.

To avoid that with Carleton, who turns 16 on June 22, Atlanta United has a very specific plan in place. The Powder Springs, Ga., native will split his time between home, the U.S. U17 MNT (whether in Bradenton or abroad) and Atlanta’s USL affiliate Charleston Battery through the end of 2016. He’ll have plenty of opportunities to hone himself against a variety of talent, from grown men 10 years older than him, to elite youth national teams around the globe.

He’ll join Atlanta for preseason in 2017, though Bocanegra hesitated to indicate what kind of role Carleton might play in the team’s inaugural campaign.

“We don’t want to put any expectations on him,” he said. “It’s a little bit too far out to say what it’s going to be… he turns 16 in a couple of weeks, so we want to make sure he’s just not thrown into the deep end and he struggles. We need to continue his development and over these next six to eight months we’ll evaluate that and see where he is."

Signing Carleton was not precipitated by the danger of the youngster spurning domestic options for something abroad – though he did have suitors – but rather the opportunity to offer a local, promising young player the chance to continue on an accelerated development curve.

It’s a philosophy that Bocanegra hopes to replicate when the team takes the field in MLS.

Prioritizing Carleton’s development goes far beyond just helping him grow on the field. The club is set to introduce a program in its academy called “Financial Fitness,” where club sponsor Suntrust will teach kids about like skills such as money management, financial advising and time management. Nutritional, educational sessions and meal-building programs will also be introduced for Atlanta’s academy setup, which Carleton will take part in. He’ll finish his schooling as he begins his new career.

From there, it’s a matter of the precocious prospect making the most of the opportunity, successfully landing the difficult jump from talked-about teen into an established professional.