Here is our Players To Watch Team of the Month for the South Region (Alabama, Arkansas, Louisiana, Mississippi, Oklahoma, Tennessee).

Juan Flores, Louisiana Fire, U17, Forward: Day 2 of the President’s Cup found the CFJL White U17 squad facing Miami Lakes SC Black of Florida.  The game was a defensive battle until the 61st minute were off a counterattack CFJL forward Juan Flores received the ball and took a strike on goal which was blocked by the goalkeeper but as the keeper went down to the ground, he slightly bobbled the ball and Juan maintained his presence and chipped the ball over the keeper for the only goal of the game.

Mohamed Hameurlaine, Louisiana Fire White U17, Forward: Day 1 of the President’s Cup had the Louisiana FireU17 Boys up against Arkansas Rush Nike.  After receiving a pass near the 18, CFJL’s Mohamed Hameurlaine maneuvered around a couple of Rush defenders and found the back of the net in the 17th minute.  The CFJL defense was able to hold for the remainder of the match for the 1-0 win. 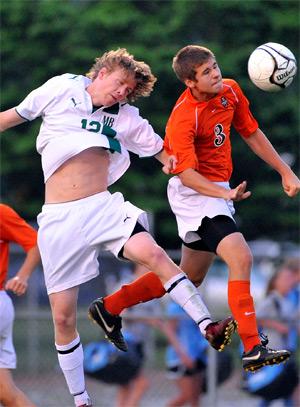 Jose Vital, Harpeth FC (Tennessee), U14: Jose Vital of Harpeth FC’s U14 squad scored off a PK in the 69th minute to level and finish the game 1-1 against the Lonestar 97B Red (Texas-South) during Day 1 play at the US Youth Soccer Region III Championships.

Nathan Diehl, Birmingham United SA U18 Academy, Defender: Nathan repeated as the Gatorade Soccer Player of the Year, re­claiming the Alabama honor he received a year ago.  The impressive defender provided offensive firepower for his Mountain Brook High School squad tying for the scoring lead this year with nine goals and four assists. Diehl will be continuing his soccer and scholastic career at the University of North Carolina.

Bryce Deguira, Forward, Randy Reichenberger, Center Midfield, Tennessee United Soccer Club 97 Boys Red, U13: Bryce and Randy are proving to be an unstoppable combination in the TUSC 97 Boys offensive attack.  The two accounted for almost 70% of the goals during the 2011 Memphis Invitational Tournament.  Bryce stepped up in the Championship final to put away the only goal to win 1-0 over the Vestavia Steamers 97.

Aaron Buchanan Tennessee United Soccer Club 97 Boys Red, U13, Midfielder: Aaron’s excellent field vision and pin point passing create chances for the high scoring TUSC 97 Boys.  Aaron not only excels at moving the ball forward but this versatile midfielder uses his speed to get back on defense.

Kara Mason, Birmingham United U15, Goalkeeper: Recorded a shutout on the opening day of the Region III Championships

Tayler Estrada, NWA Lightning U16, Forward: Scored twice in the club’s 4-3 win over Louisiana Fire in the opening match of the Region III Championships.

Britne Holderby and Julia Kimbrough, Birmingham United U15: Have been a stalwart for her club as it advanced to the Region III Championships.

Katie Danehey and Laura Lee Smith, Birmingham United U18: The defenders have had a major role in their team’s success as they close out club careers.