Over the past year, Daniel Reeves has emerged and blossomed into a potent attacking threat for D.C. United’s U16 Development Academy side. 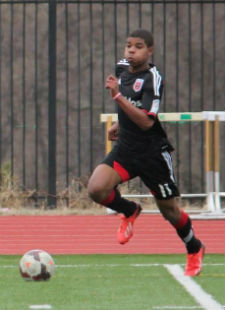 With 13 goals and 11 assists on the season, he’s one of the top scorers on the team, and will stay close to home at one of the nation’s best programs.

“Maryland is the perfect fit for both academics and soccer,” Reeves told TopDrawerSoccer.com. “Maryland has a great business school and the soccer program is phenomenal. I’ve been constantly trying to improve as a player and the way to do that is to put myself in a challenging environment.”

It’s never a surprise to see local talent from the D.C. area make commitments to Maryland, and Reeves was impressed by a variety of aspects of the school.

“It’s such a strong program because they have so many quality players in all positions who want to win as a team, which isn’t always the case,” Reeves said. “The expectations are high from the coaching staff and the players. This means everyone is always challenging themselves individually to find a way to make a positive difference for the overall good of the team.”

A junior standout for both the Roanoke Stars and Blacksburg High School, Shane Mecham captained his high school team to a state championship in 2013.

In the fall of 2015, he’ll head south to begin his Division I playing career, aiming for similar success at the next level.

“I decided to commit to UNCW because I believe they have a very promising and exciting soccer program, based on the coaching staff, players, and overall philosophy and playing style as well as a very strong academic environment,” Mecham told TopDrawerSoccer.com. “I am very excited about being a part of future success at UNCW which I am sure will provide me with opportunities to succeed and play at the highest level possible.”

From the start of his college search, UNC Wilmington was tops of Meachem’s college list – with family playing a significant factor in that decision.

“UNCW was not my only option, but was my first choice because of the upcoming success and growth of the soccer program, and also the location of UNCW,” he said. “The family environment among the team, which I was highly exposed to because my older brother Michael Mecham is a current player on the soccer team at UNCW, also drew me to Wilmington. I have a very strong bond with my brother and I am looking forward to being able to play alongside him again, which I greatly enjoyed when I played with him as a freshman on the Blacksburg High School team.”

An explosive outside mid who likes taking players on, the myriad of educational choices was a major factor in Ben Bates’ college commitment.

“I decided to commit to Lehigh because it offers me a variety of different academic opportunities, which is great for someone like me since I'm not really sure what I want to do,” he told TopDrawerSoccer.com.

The Florida native took a liking to head coach Dean Koski and the rest of the coaching staff, and is optimistic things are looking up at the Pennsylvania program.

“Lehigh's recruiting classes are looking strong and I hope I can come and immediately make an impact,” Bates said. “As for the school itself, I was really impressed with the campus, and the academics are outstanding, which is important for my family and me.”

Forward Jalil Blalock (PDA) committed to Monmouth for the class of 2015.

Midfielder John Skahan (Sunrise SC) committed to North Carolina for the class of 2016.

Defender Peter Prescott (Portland Timbers Academy) committed to Creighton for the class of 2015.