Boys Commitments: Across the nation 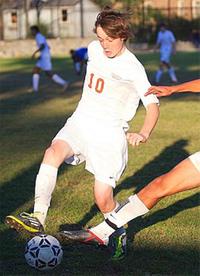 The historical background and similarities to his club teams lured Dugan Zier to make his verbal commitment all the way across the country.

“UCSB is a top program with an incredible coaching staff led by Tim Vom Steeg,” he told TopDrawerSoccer.com. “I was drawn to it because of their fan base, tradition, as well as the style of play, which closely mirrors the one that the New York Red Bulls Academy has taught me.

It’s not just the soccer drawing Zier to the West Coast, as he sees the opportunity to enroll at a prestigious academic institution.

“The caliber of the education that I will receive while I spend my college career at UCSB gives me fantastic opportunities in life,” he said.

When it came to selecting Air Force, the list was lengthy for Ryan Fulton.

“There are many reasons why I committed to the Air Force Academy,” he told TopDrawerSoccer.com. “The most important factor however, is that the coaches preach a possession minded style, and on a personal side they are also going to be great mentors for me.”

Other perks of the soccer program stood out to Fulton, including a successful team on the field (they won the MPSF Conference tournament last fall) and getting the chance to fly to away games on a cargo plane.

And although Fulton was a bit hesitant about committing before making his visit to the campus, once he arrived all his doubts were removed.

“The Academy itself is one of a kind,” he explained. “Before I took my official visit, I was a little hesitant about being in a military setting but after seeing a glimpse of life there, I knew it was for me. The academics are second to none and having the opportunity to serve my country is something very special. It will be a challenge balancing soccer, academics, military requirements, and my social life, but I could not be any happier with my choose.”

Forward Tyler Sanda, from Internationals, committed to Akron for the fall of 2013.