Fresh off bagging 17 goals for the Clearwater U18 squad in the Development Academy, Tobin Howell found the right college fit for him. 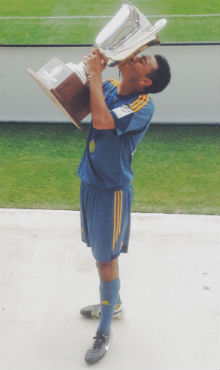 “I knew that I found a coach in coach [Louis] Bennett who loved soccer as much as I did,” Howell told TopDrawerSoccer.com. “That was really important to me.”

Playing style was another factor in the Florida native’s choice to head north to Milwaukee, not to mention adding a new layer to a sibling rivalry.

“Their system really fit my style of play and I could see myself succeeding in their offense,” Howell explained. “I am also really excited to join my sister Hannah in the Big East. She plays for Georgetown so that should make for a nice family rivalry.”

Last season was a banner campaign for George Mason, winners of the Atlantic 10 confernce tournament.

Looking to further the program’s accomplishments on the field, the Patriots picked up the commitment of William Zarco for its next recruiting class.

The Virginia native found everything he was looking for in a college home.

“George Mason was the ideal choice for me due to its strong soccer program, excellent academics, and its location,” Zarco told TopDrawerSoccer.com. “Their philosophy and style of play suits me and will allow me to play to my potential. Other important factors were the highly experienced coaching staff, the modern facilities, and being able to play in my hometown in front of family and friends.”

The team’s exploits on and off the field were huge factors in Zarco’s choice.

“I like their fast paced attacking style of play which is what I enjoy playing,” he said. “The team also does volunteer community service that I felt was a great thing and something I would like to be a part of. Also getting to know the coaching staff and their philosophy towards the game gave me the confidence that I could excel under their direction.”

Zarco also felt that the school’s potential away from athletics was similar to the promise he saw from the team on the field.

“I like how Mason is a fast growing university with a lot of diversity,” he said. “The school also provides many resources that will help me succeed as a student athlete.”

Recently crowned Development Academy national champions with his LA Galaxy U16 side, Jorge Ruiz paired that with his verbal commitment to UC Santa Barbara.

“UCSB is soccer heaven,” Ruiz told TopDrawerSoccer.com. “It's the place to be for college soccer and I couldn't be more pleased with my decision."

Ruiz, a self-described team player, finished second on the team with 13 goals for the Galaxy, liked the soccer team’s uniqueness.

“The stadium, the fans, the way they go about things is all very distinct, in a good way of course,” he said. “Everyone loves soccer at UCSB and I think that's very important because it only amplifies the love of the game there which makes the game much more enjoyable.”

Winning a title back in July with the Galaxy was unlike anything he experienced before.

“No feeling will ever compare to the feeling of holding that national championship up,” he said. “That one was for all of our loved ones here back home in LA. It was simply amazing."

The SoCal native also enjoyed the chance to play at a school close to the beach and not far from home.

Forward Zane Ross (Ohio Elite) committed to Radford for the class of 2015.

Midfielder Eric Davies (FC Dallas) committed to Saint Louis for the class of 2015.