The pipeline from the New York Red Bulls Academy to the Georgetown men’s soccer program remains alive and well for 2015. 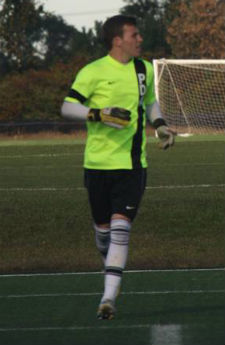 The school was the perfect package for Kyle Zajec, who will join a slew of Red Bull Academy brethren at the D.C. program.

“I picked Georgetown because it had all the things I wanted in a school,” he told TopDrawerSoccer.com. “The size of the school was perfect for me. The location was also something that attracted me; it's only a four-hour train ride from home and is situation in the nation's capital. I loved the campus from the moment I arrived. It was a place that I felt I could call home for my four years in college. The school also could offer me very good academics, which was something that I definitely wanted.”

Former Academy teammates aside, Zajec found much to like about a soccer team that has certainly made massive strides over the past few seasons.

“I like the style of play of the soccer program, and I felt that it would suit me as a player and aid in my development,” he said. “The coaching staff was also something that drew me to Georgetown. Coach Wiese, coach Samol, and coach Gill are all guys that I can enjoy my years of college with as they help me become the best soccer player that I can be.”

Zajec is the third player committed for Georgetown’s 2015 recruiting class.

A technical goalkeeper who places an emphasis on his decision-making ability, Joe Ohaus is the netminder for one of the best academies on the East Coast in PDA.

The talented shot-stopper found the right package at Duke, and will hope to turn the program back into a perennial ACC contender.

“There are very few schools in the country that can offer a very strong soccer program and, at the same time be one of the most prestigious academic institutions in the country,” Ohaus told TopDrawerSoccer.com.

The recruiting class of 2014 is shaping up to be a very good one for the Blue Devils, and that was one of many reasons Ohaus decided to sign his NLI to join the program.

“The soccer program has a very good setup at Duke,” he said. “They have a great coaching staff, great facilities, and all of the support that you could ask for as an athlete. As a member of the ACC, Duke plays in one of the toughest conferences in the country. Also, we have very good recruiting class coming in this fall that I believe will help the program be successful for years to come.”

Ohaus is part of a strong crop of players coming to Duke in 2014.

Sigma FC, an Ontario, Canada based youth club, has certainly made noise with the caliber of player it has sent into the college ranks over the past couple of years.

Players like Chris Nanco, Cyle Larin and Alex Halis – to name just a few – have all made an impact early on in their college careers.

Now, a former teammate will look to do the same, as Ty Smith is heading to Bowling Green this coming fall. The school’s blend of athletics and academies stood out to him during his college search.

“I really liked the campus and the quality of the athletic facilities,” Smith told TopDrawerSoccer.com. “The whole school is very well maintained.”

Smith was a teammate of Larin and Nanco prior to their departure for college, and he’s hoping to make an impact up front right away. The coaching staff heavily factored into his commitment.

“Coach [Eric] Nichols' extremely competitive nature played a big part in my decision,” Smith said. “He has a strong desire to bring the BGSU soccer program to the next level and I want to contribute to the team's future success in any way I can.”

Midfielder Christopher Schroeder (Chivas USA) committed to St. Lawrence for the class of 2014.