While foreign recruits are becoming more and more commonplace across Division I men’s soccer, Belgian additions are more rare than other nationalities. 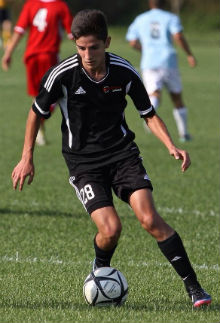 Johan De Picker bucks the trend. A few years ago, the midfielder moved with his family to Norfolk, Virginia, because of his dad’s job with NATO. He joined up local club side Beach FC, and is also a standout and captain of Ocean Lakes High School team in the Tidewater area.

Eventually, that led to his commitment to nearby Old Dominion, where he’ll join the program in the fall of 2015.

“I could have decided to go back to Belgium and go pro but in Belgium you have to choose between going pro or going to college to get a college degree,” De Picker told TopDrawerSoccer.com. “I want to go pro of course but you never know what can happen in life and having a college degree is very important. ODU was there since the beginning they started showing interest in me. Coach Myernick was the first college assistant coach to show interest in me. After my second visit I felt like ODU was the right place for me, coach Dawson and the assistant coaches are not only great coaches but are also amazing people.”

Along with the comfort with the coaching staff – an important element to his decision, because his family will head back to Belgium in 2016 – he also liked that other players are on the team from abroad.

“The team is awesome, it's a young squad but with many great players, the guys were really cool during my visit and I want to be a part of the family,” De Picker said. “Also I'm not the only foreign player, so I'm sure guys from other countries are going to help me and make my transition easier. ODU is just the best place for me and I'm excited to be a part of the team.”

De Picker’s background in Belgium included playing for UR Namur and training sessions with RSC Anderlecht, the biggest club in the country. His past few seasons in the United States gave him a unique perspective on the contrasts between soccer cultures. Not to mention a chance to kick field goals for the Ocean Lakes football team.

“One of the big differences is that in Belgium soccer is the number one sport, when you are 5 years old most of the kids in the country start to play soccer so automatically the development of soccer is better and the younger you start the better you can get,” he said. “We also have some of the best academies and coaches you can find in Europe; so for me the transition from Belgium to here was really difficult. However American soccer is getting better, the soccer style is totally different. American soccer is way more physical than in Belgium, so I've learned a lot about playing more physical since I'm here. I'm happy to be here in US, it's a challenge for me soccer wise and when I'm on the field I have another mentality and another soccer style than the other guys."

Looking for a program with a bright future, New Jersey native Burak Ozdemir didn’t have to look beyond an in-state program.

“I chose Seton Hall for various reasons,” he told TopDrawerSoccer.com. “The professionalism at Seton Hall is at a very high quality. Coach Gerson is also making a very strong program for the upcoming years and has high expectations for me. It's also almost as if you're at a professional club. In addition, it is a perfect fit for me academically and their style of play. I'm looking forward to playing in the Big East conference and living up to the challenges.”

Location was a big factor for him, as the school is a two-hour drive him his South Jersey home.

“I liked that it wasn't too far from home and not too close,” he said. “The campus was great and it's also near New York City, which is also good for a life after college.”

The forward is the first reported verbal commitment to Old Dominion’s 2015 recruiting class.