A staple in past U.S. U15 and U14 BNT camps, Chicago Magic midfielder Luka Prpa recently picked his future college home, making a commitment to a power in the Big East. 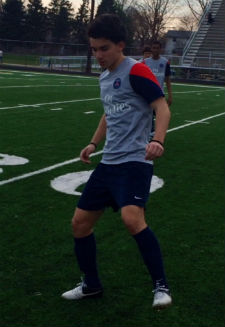 “I decided to commit to Marquette because I think it is the perfect combination of academics and soccer,” Prpa told TopDrawerSoccer.com. “The school’s quality education that it has to offer is well known nationally and their soccer program is one of the best in the country.”

Proximity to his hometown was another driving force in the choice.

“Another factor in my decision was that Marquette was close to home,” Prpa said. “We are a very close-knit family. By staying close, my family and friends can always visit and watch me play.”

A technical and attack-minded midfielder, Prpa said that he favors playing in either a No. 10 role or No. 8 role in the middle of the park. He’s gotten to know the coaching staff at Marquette during summer camps he’s attended since he was younger, and knows that the way the team plays is going to make it an easy transition for him.

“Marquette’s possession style of play suits me well,” he said. “I am excited and look forward to the opportunity to play in one of the best conferences in the nation, the Big East.”

Prpa is excited about the caliber of education he’ll receive at the Wisconsin program, knowing that it will help him improve on and off the field.

His stints with the U.S. youth national team setups have been a benefit to help him get this far.

“Those experiences with the national team have been very valuable to me,” he said. “Not only is it a great honor, but also playing against the best talent from across the country has definitely made me a better player. The speed of play with the national team prepares you mentally and physically to play the game at faster pace and make quicker decisions. I have played in a variety of different positions with the national team, which has improved my game and made me more versatile as a player.”

Prpa is Marquette’s third commitment for 2016.

For Camden Buescher, the decision to commit to Northwestern was the combination of school and soccer he saw available to him at the Illinois institution.

“There are two main reasons I chose Northwestern University; The first being the academic piece that Northwestern offers,” he told TopDrawerSoccer.com. “The academic reputation they have is second to none. I feel that getting a degree from Northwestern will be a great step for my future and will provide me with countless opportunities. The second reason is the athletic piece that Northwestern offers. The soccer program they have built is top notch and able to compete with anyone in the country. With the combination of academics and athletics, I felt the Northwestern opportunity was one that I couldn't pass up and I am very confident it was the right fit for me.”

Buescher, a technical player for his Ohio club side, thought he would be a great fit for the way the team tries to keep the ball.

“Under the leadership of coach Lenahan and the rest of the coaching staff, they consistently develop teams year in and year out who play a great brand of soccer,” he said. “They like to keep the ball and play a possession style, which suits me perfectly. Making the NCAA tournament eight out of the past nine years is really something special. They will always compete to win the Big 10 and make a run in the NCAA tournament.”

Northwestern currently has two reported verbal commitments for the 2015 class.

Midfielder Zachary Ogden (FASA) committed to Methodist for the class of 2014.

Forward Chase Hovious (Chargers SC) committed to Liberty for the class of 2016.

Forward Gorka Aperribay (Orlando City) committed to UCF for the class of 2015.

Forward Ryan Schaefer (Seattle Sounders) committed to Denver for the class of 2015.