With ten national championships in the cabinet, the Saint Louis Billikens program can lean on its history to convince players from all across the country to head to Missouri.

Last month, head coach Mike McGinty and his staff nabbed verbal commitments from players in Wisconsin, Virginia, and California for the 2013 class. 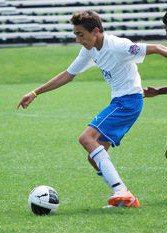 The outside back from Southern California picked the Billikens because, among other reasons, he wants to contend for a title immediately at the collegiate level.

“I chose Saint Louis for many reasons,” Saad wrote in an email to TopDrawerSoccer.com. “Saint Louis gives me the opportunity to compete for a National Championship at the Division I level and obtain a fantastic education in the majors I want to study.”

Like many who have interacted with coach McGinty, Saad is excited to get to work and learn from the former Virginia assistant coach.

Miles Davis, the former U.S. U14 Boys National Team player, gave a similar explanation for why he decided to join the Billikens.

“The moment I met the coaching staff and visited the campus, I knew that SLU was the choice for me,” Davis wrote in an email to TopDrawerSoccer.com. “SLU has a very good reputation in the engineering world and a great soccer team.”

Davis is also buying in on McGinty, who is only in his third season in charge of the program.

“Coach McGinty has a clear vision of where he is taking the team and I want to be at part of that so the decision was simple.”

The Golden Eagles of Marquette continue to stack up local talent with the addition of center back Danny Jarosz to the stable for the 2014 class.

“The fact that I can get a great education at a superb institution, and play soccer as well, factored in the decision my family and I recently made,” Jarosz wrote TopDrawerSoccer.com in an email.

Jarosz was one of the center backs for the Milwaukee Bavarians U15, which won their third consecutive Wisconsin state championship in the fall. He also started at center back from Marquette University High School during his sophomore campaign.

The defender joins Andrija Novakovich as early verbal commits to the Marquette 2014 class.