Boys Commitments: Bound to be a Buckeye There were several things that Marcus McCrary liked about Ohio State. The city of Columbus and his mom’s proximity in Cleveland were chief among them. But like many other recruits, the coaching staff’s pitch was one of the final deciders about the soccer team. 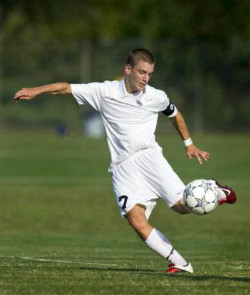 “The coaching staff is what really stood out to me,” he told TopDrawerSoccer.com. “Coaches Bluem, Speth and Goode were very professional and seemed knowledgeable about the game and how to run the program. The team welcomed me on my official visit and made me feel as if I was one of them already. The soccer program has a team that is relatively young this year and that I believe will make a major impact in the recent years to come.”

The school’s commitment to athletics was another factor that ultimately tipped the scales in favor of the Buckeyes.

“What I liked about the school itself is that it is a Big Ten Conference school and that there is very much interest in the athletics that go on there,” McCrary said. “On the academics part, an academic adviser, and I planned out my intended major and easily laid it out for me how I will be able to achieve it.”

McCrary also considered Wisconsin(m) and Xavier(m), as well as several other Division I programs.

When it came time to pick the right college to continue his playing career, it seemed like a no brainer that Cameron Gilreath eventually made his commitment to Evansville, a program he knows well.

“I have been around the Aces soccer program since I was 12 years old,” he told TopDrawerSoccer.com. “I have always gone to Aces Soccer Camps and come watched UE play their home games. My travel coach is UE assistant coach Marshall Ray which has given the UE coaching staff a good chance to look at me and recruit me. Also, two of my former high school teammates from Harrison Patrick Hodges and Eric Teppen are currently junior starters at UE. Having the chance to play in front of my hometown is an incredible opportunity, especially for a program like UE."

A small, technical player (Gilreath is listed at 5-foot-6), there were other things that drew him to the school.

“I fit in well to the way they play a 4-3-3 with how they like their outside backs to be players capable of getting forward and attacking,” he said. “I also like the hard working mentality the program has and that they are working their way up to become a premier division one team in the nation.”

The options in the classroom also met his interest.

“UE is a great fit for me academically because I plan to study business in the Schroeder School of Business and study abroad at UE's secondary campus in England,” he said.

Midfielder Bradley Dunwell (Chicago Fire) committed to Wake Forest(m) for the class of 2015.