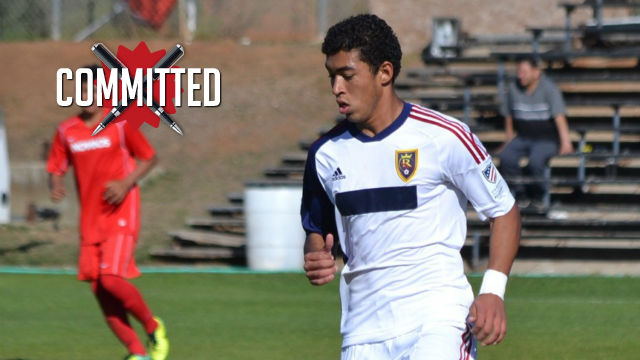 Real Salt Lake AZ is restocking the talent in Westwood. Danilo Acosta, a midfielder or defender, is the latest member of the residential academy in Casa Grande, Arizona to give his verbal commitment to the Bruins.

“I felt that the University of California, Los Angeles was the right place for me academically and it would challenge me on the pitch,” Acosta told TopDrawerSoccer. “It also was close to home and I really like the warm weather and where the campus is located and the style of the campus.”

The talented, versatile player had plenty of options at the collegiate level, but he elected to pick the Pac-12 powerhouse.

“I had a lot of schools interested in me – for example: Washington, Maryland, Duke, and Santa Clara,” Acosta said. “I didn’t choose these schools because they were far from home and the cold weather. None of these schools were the right place for me because UCLA fit my personality and I believe the Bruins will help get me to the next level.”

The RSL prospect has experience with the youth national team at the U18 level most recently. While listed as a midfielder on the U18 MNT roster, Acosta can fill a variety of positions.

“I’m natural a center defensive midfielder but I’m versatile on the pitch,” Acosta said. “I also play left back and center back but I’ll be happy to help the Bruins on any they need me on the field.”

An aggressive outside back who plays on the right side, Addisson Parrish can also play in the midfield or up front.

A program in the Midwest eventually lured his verbal.

“I decided to commit to Loyola-Chicago because I built up a strong relationship with the coaches and players through multiple visits as well as the location of the school, in Chicago, being spectacular,” Parrish told TopDrawerSoccer.com.

The program’s closely-knit team appealed to him, along with the way that had coach takes specific interest in helping take care of each player’s needs and even more so, the players’ desire to win games.

“The team is filled with a great group of players who all want to win and will do what it takes to win,” Parrish said. “Along with this the program at Loyola is on the come up and has a chance to be very good in the upcoming years.”

Academic opportunities also spurred him towards the school.

“The thing I liked most about Loyola-Chicago as a university was the ability to get an MBA in any department of business in five years with a plan specific to the school,” he said. “Along with this, Loyola has a high ranking marketing school and a top notch internship program which will be instrumental in finding a job after graduation.”

Parrish is the first verbal commitment to Loyola-Chicago for 2016.