When Eddie Soto was named head coach of San Francisco, it was only a matter of time before former LA Galaxy Academy players began to make the trip up to the Bay Area to join his project. 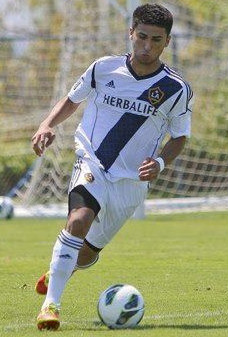 Soto, who spent eight seasons as an assistant coach at UCLA(m), also coached for LA’s Development Academy side.

Count Manny Padilla in, a quick, technical winger for the LA Galaxy Academy, who also checks in at No. 64 in the IMG Academy Top 150.

“As I laid out my options of schools, I asked myself where can I make a great impact right away, what school fits by style of playing, and what coaching staff is willing to push me to my greatest potential so that I can possibly continue my soccer career beyond college soccer,” Padilla told TopDrawerSoccer.com.

Padilla, who comes from a Catholic background, identified with the school’s religious affiliation. He also liked the program’s history – they’ve won six national titles – but Soto’s presence there was obviously notable.

“Not only is it prestigious but knowing Eddie Soto and his coaching staff were the new staff at USF, it really caught my attention because as a player they have taught me so many things when they used to coach at LA Galaxy,” Padilla explained. “I feel that the coaching staff is a perfect fit for me.”

Moving to Northern California was a plus, as it could give his family a chance to come see him play one day.

“The school itself has a magnificent location and it's not that far from home, so it gives my folks an option to go watch me play as they always do since I started playing the game,” he said. “The school itself is a great private school, very prestigious academically and soccer wise.”

“I noticed that coaches, Greg Andrulis, Trevor Singer, and John O'Hara really looked after their players and I really wanted a school that had a family environment,” Wrona told TopDrawerSoccer.com. “Everything about the program is impressive, the coaching staff is experienced and exuberant, the facilities are world class, and the professionalism of winning and getting better as a team is fantastic.”

Along with the coaching staff, Wrona had a great first visit that drew him in, as he stayed on campus for a few days and talked with several current players.

The proximity to the nation’s capital was another positive.

“I loved the idea of catching the subway and in a few minutes being right in Washington D.C,” Wrona said. “There are numerous things to do on and off campus, which made it even more appealing.  Also, the school spirit is amazing, I hope during the off-season I will be able to be a part of it and support the other Mason teams.”

Hope for the future factored heavily into Trenton Whitely’s commitment to college.

“I decided to commit to Mercer because of how the program has been progressing in recent years,” he told TopDrawerSoccer.com. “Coach Ruzzo was very patient with me during the recruiting process and he is bringing in a big 2014 class so the team will be young and fresh.

The program is moving from the Atlantic Sun into the Southern Conference, and Whitely was drawn in by the promise of solid competition.

“Mercer itself as a school, it’s known for medicine, and I am an aspiring Radiologist,” he said. “So Mercer has my major that I would like to study and has all the classes necessary for me to prosper one day in that field.”

Midfielder Foster Langsdorf (Portland Timbers) committed to Stanford(m) for the class of 2014.

Forward Daniel Musovski (Las Vegas Premier) committed to UNLV for the class of 2014.