There is a saying among college coaches that if you build the spine of your team, the rest of it will take care of itself. It has worked to some extent with championship-caliber teams relying on strong goalkeeping and a consistent scorer.

Michigan decided to the roll the dice on that theory and grab a goalkeeper for the future in former U.S. U17 Men’s National Team member Evan Louro, who verbally committed to the Wolverines last month.

Louro is expected to back-up captain Adam Grinwis, who will be a senior in 2014, and contend for the starting job shortly there after. 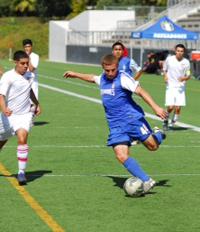 “I decided to commit to the University of Michigan because it had everything I was looking for: an impressive state of the art of the facilities, outstanding academic support for its student athletes, and a phenomenal soccer program.,” Louro told TopDrawerSoccer.com.

Not afraid to mince words, Louro continued singing the praises of his future home.

“The Big Ten is the most competitive conference in college soccer. I know I’ll be playing at the highest level possible and that’s important to me.”

As the starting goalkeeper for the U17 MNT for a large stretch of the most recent cycle, Louro had interest from his pick of schools across the country.

“I looked at some ACC programs (Wake Forest, NC State), Big East (Georgetown, and other schools (Rutgers, UCLA) that were recruiting me, all of which were great schools with solid coaching staffs and although I really enjoyed my visits to their campuses, in the end it came down to what was the right fit for me.”

“The knowledge, passion and respect for the game demonstrated by the coaching staff at Michigan sealed my decision. They have the same kind of commitment to the sport I see day in and day out at the New York Red Bulls.

“At Michigan it is not just a soccer program; it’s a way of life. I have a lot of respect for Coach Chaka Daley and all his staff. They instantly made me feel part of the Michigan family and their interest in my ability as a goalkeeper was sincerely appreciated.”

Louro’s aspirations are in the professional arena and he believes that he has selected the right school to get him to that point.

“My ultimate goal is to go pro and I have no doubt that coach Chaka and his staff can help me to continue to develop my skills so that I can fulfill that dream.”

He is the fourth verbal commit for the 2014 class for the Wolverines. He joins fellow New York Red Bull Billy Stevens as well as Tristan Jacob and Nathan Kohl.

It is tough to beat the weather and location of Irvine, California. For local Corey Schramm, it was too difficult for any school to surpass the Anteaters and he decided to give his verbal commitment to coach George Kuntz last week.

“I knew Irvine was the best school for me after attending their ID camp and talking to the coaching staff,” Schramm told TopDrawerSoccer.com. “I bonded really well with them and liked the way they coached and prepared you for a better future. Irvine also is a great school for my major in chemical engineering.”

Schramm was a starting defender on the Pateadores U18 squad last season in the Development Academy. He made 27 starts for the playoff squad that finished 15-11-5 in the competitive Southwest Conference. Although, he lined up at defense with the Pats, his position in college appears to be more advanced.

“Coach Kuntz and I did talk about my position on the field and I will be playing defensive midfield,” Schramm said when asked about his plans with the Big West program.

Irvine beat out UCSB, CSU Dominguez Hills, Point Loma, Monterey Bay, UCSD, and some other programs out of state for the verbal commitment of the local product.

Central Connecticut could’ve used another goal scorer in 2012, as the squad dropped four games by a one-goal margin on the way to a 8-8-2 season.

The coaching staff may have added the right piece to get the better side of those close results in the future with the addition of Nicholas Tunic.

“I chose to commit to Central Connection State University because it seemed like a great school for soccer, as well as for my academics,” Tunic, a forward, told TopDrawerSoccer.com. “I also think that the soccer program is great, and the coach is great as well.”

Tunic said his visit to the campus helped with the process.

“When I visited the campus, they had top quality facilities and the campus was great.”