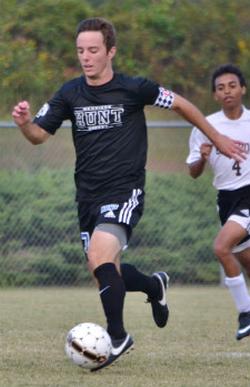 It’s been quite some time since Jacob Lee verbally committed to UNC Greensboro after making his decision at the start of his junior year last fall.

There was plenty that stood out to him about the program.

"[It] seemed like the perfect fit for me,” he told TopDrawerSoccer.com. “[I] fell in love with everything about the school and soccer program the first time I visited."

A connection with the coaching staff also figured prominently, as UNC-G head coach Justin Maullin coached Lee for a couple of years with the Olympic Development Program.

Along with the program’s ability to compete in the Southern Conference and the style of play, Lee – a left back who likes to join the attack – was also intrigued by what the school offered away from the soccer field

“[I liked] the layout and size of the campus and classes they have to offer,” he said.

A target forward from Georgia, Tyler Edwards looked north for his college commitment, joining a Monarch program that is always there or thereabouts in the national rankings.

“I committed to Old Dominion because it was a very good school with fantastic academics and a soccer program that competes at the top level of division and is consistently ranked in the top 25 in the country,” he said.

Edwards is excited by the team’s youth, as he’s optimistic the success will continue into 2014 and beyond, as the team is fresh off an appearance in the 2013 NCAA tournament.

“It is a young team so all it can do is get better,” he said. “They are consistently ranked in the top 25, have great coaches that can really help me become a better player, and also have fantastic facilities.”

He also sees that the school, while offering a competitive playing experience, will set him up well for his future away from the game.

“You have mandatory study hours that can make sure your doing your work and studying and there are great connections from the school that can set you up for life after college with a job with whatever degree you receive,” he said.

Defender Matthew Gallo (New Generation SC) committed to Stonehill for the class of 2014.

Goalkeeper Bobby Edwards (Jersey United) committed to Saint Joseph's for the class of 2014.