One of the top recruits in the class of 2016 has made his decision.

“When I visited I felt right at home and loved everything about the school,” Lindley told TopDrawerSoccer.com. “They are great academically and the soccer program is one of the top programs in the country. Also I have family that lives about an hour away.” 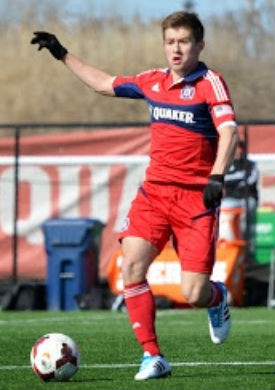 Lindley, an Indiana native who made the switch the Fire earlier this year (he played for Fire affiliate Indiana Fire Academy prior to that), has been in and out of various U.S. youth sides over the past few years.

Having seen time in U.S. U14, U15, U17 and U18 youth national teams, picking Carolina was influenced by a variety of factors on and off the field. The style of play, coaching staff and academics were all strong lures.

“They play a great brand of futbol and I wanted to be a part of it,” he said. “Also after talking to players that have gone through the program and players that are currently there say that Carlos [Somoano] and Grant [Porter] are great coaches and really push them every training session.”

The move to the Fire Academy has also proved to be beneficial to Lindley.

“This spring season so far with the Chicago Fire has been a huge step in the right direction,” he said. “My Coach Larry Sunderland has played a huge role in my development as a player. As well as the fact I get to play with great players all the team and occasionally get my chances with the first team and the reserves. All in all the move has been a great decision and I'm learning and improving more than I thought was possible.”

Lindley is the first reported verbal commitment to UNC for the class of 2016.

A technical defender who can play in a variety of spots on the field, Mark Skrivan’s comfort level with SIUE played a big part in his commitment to the program.

“SIUE seemed to be the right fit academically and it's also close enough home for family and friends to come out to watch me play,” he told TopDrawerSoccer.com. “Also, I chose SIUE because of how comfortable I felt with the team and the coaching staff. I like the fact that the soccer program plays at the highest level in collegiate soccer.”

Skrivan also noted that the style of player between his powerhouse St. Louis Scott Gallagher club and SIUE was a draw for him.

He enjoyed plenty about the school away soccer as well.

“I like how beautiful the campus is,” he said. “I like the size of the campus being that it is fairly large and how kind everyone seemed to be.”

Jared Heller found the best of both worlds when he decided to make the commitment to join Division III Greensboro in the fall.

“I get a top-notch education with small-sided classes and play high-level soccer,” he told TopDrawerSoccer.com. “Coach [John] Trice played a huge role on my commit. His passion and drive to win, made me want to be part of it.”

Location was an obvious draw as well.

“I just like the beautiful city of Greensboro,” Heller said. “North Carolina is a big state of soccer. I can't wait to be part of this program and hopefully we can make it farther in the tournament.”

Goalkeeper Mikal Outcalt (Challenger Crew Jr.) committed to Pittsburgh for the class of 2015.

Midfielder Ben Bates (Chargers SC) committed to Lehigh for the class of 2015.

Goalkeeper Colin Hanley (Hilmar Milan) committed to Niagara for the class of 2015.