A versatile defender who can slot in at either outside back position, Cesar Murillo takes pride in his organization and leadership abilities at the back – not to mention defensive prowess. 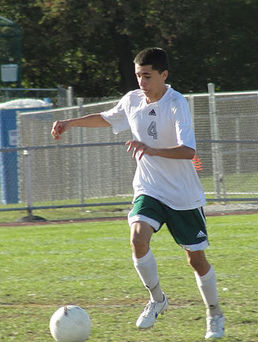 And for him, the College of Charleston(m) had everything he was looking for in a college home.

“When deciding to commit to the College of Charleston(m) it came fairly easy,” Murillo said. “The College of Charleston had everything I looked for in choosing where to go. Charleston is a very beautiful city. The support that soccer receives from everyone is incredible. Everyone on campus knows about the soccer team. When I went on the visit, after the soccer game versus Vermont, we were walking around the campus and every student we passed asked how we did today versus Vermont. I thought that was awesome.”

From an on the field perspective, the program’s playing style echoed a lot of what he has experienced during his youth career with FC Dallas, another strong factor in his decision.

“I like the fact that The College of Charleston has a similar style of play as FC Dallas,” he said. “They like to keep possession and build out of the back. As a defender, I like to touch and come out playing. Also, I spoke to the coaches and after talking to them I can see the soccer program going in a positive direction.”

An unselfish player who likes to spot the perfect pass, Giovanni Garcia didn’t have to look too far from home for his future team.

“I decided to commit to Northern Illinois because the environment is great and it’s the best fit for me,” he told TopDrawerSoccer.com. “I believe that I will develop as a player and person the most in Northern Illinois."

Forward Cameron Jones (Everton FC Westchester) committed to Massachusetts-Lowell for the class of 2014.

Defender Tommy Dorsay (PDA) committed to Stevens Institute of Technology for the class of 2014.