Score one for the Bluejays.

The ever-prominent Omaha-based program picked up a significant piece to its 2013 recruiting class with the verbal commitment of Colorado Rapids Academy midfielder Ricardo Perez last month.

Perez, who has trained with the Rapids first team and has appearances with the reserve side, felt comfortable with the feel Creighton offered.

“I decided to verbally commit to Creighton because I think it is the perfect fit for me,” Perez told TopDrawerSoccer.com. “I feel this way because I really like the school, the campus, soccer program, the coaching staff and the city. I went to three Official visits in the last six weeks, it was a very good thing for me to meet with the coaches face to face, and watch each team train and play a league game.”

The Development Academy stalwart caused a stir earlier this year with an impressive goal from distance, and he’ll bolster Creighton’s midfield from day one starting next fall. 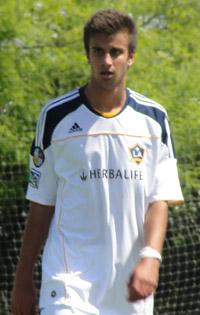 That’s exactly what he hopes to do, as Perez is hoping to help lead the school to a national title one day, and repay the program that appealed to him so significantly.

“I liked lots of things the team, the coaching staff, the outstanding facilities that the soccer program has,” he said. “Also, I believe at Creighton I can keep developing my soccer skills to the next level.”

This month, the rich get richer.

Los Angeles Galaxy Academy standout Justin Dhillon recently gave his verbal commitment to the Big West North Division team. Dhillon, an attacking winger, has been one of the most prolific scorers in the USSF Development Academy over the last two plus seasons.

Last weekend, Dhillon recorded a hat trick in 20 minutes in the second half against Strikers FC. Over the course of the couple of seasons he has played with the MLS academy, Dhillon has amassed 49 goals in Development Academy play.

“I chose Cal Poly for a number of reasons,” Dhillon told TopDrawerSoccer.com. “I really feel that Coach [Paul] Holocher is going to be committed to my personal development and really help me go pro...and that's my main objective. I really like their possession-oriented playing style, which is what I play at the Galaxy, and feel that I'd really fit in well. I also want to be able to start making an impact on the field early on and I think I'll get that chance.”

The 17-year-old has also done well in the classroom with a 3.8 grade point average entering his senior year.

“What's important to me is the right balance of athletic development, academics and environment,” he continued. “Academically, I like the learn-by-doing style of education. And as far as the environment, it’s such a great college town and one of the best soccer environments I've seen.”

On the field, Dhillon figures to be one of the most dangerous players in the Big West from the first day. The six-foot-three attacker is extremely difficult to knock off the ball and should slot in well at one of the spots on the wing for the Mustangs.

The trip up the coast to Cal Poly will also reunite the Galaxy prospect with his older brother Sean who is currently a freshman with the Mustangs.

“Since my brother joined the program, I've been up to campus and been to quite a few games and the crowds are crazy. It's one of the best soccer atmospheres in the country.”

“I decided to go to Loyola because I felt like it was the right fit for me,” Remeniuk told TopDrawerSoccer.com. “I felt like I could make a big impact.”

The high school junior already has some familiarity with coach Anderson due to his time at Anderson’s Camp Shutout, a goalkeeper specific event during the summer every year.

“For the past five years, I have been going to his camps,” the 16-year-old said. “The camp is my favorite week of the year. I really look forward.”

The Sockers FC product revealed that he narrowed down his decision to Wisconsin, Marquette, and the Ramblers before picking the local school.

“It was definitely one of the deciding factors,” he said about the location. “Loyola is about twenty minutes from my house.”

At the club level, Remeniuk and his teammates are undefeated on the year with a 4-0-3 record. The Loyola commit has played in five games and started three.

Remeniuk is the first announced commit for the 2014 Loyola recruiting class.

A versatile player who can either sit along the back line or plug the central midfield, Brian Hail is reading to take the step from the Academy to Big Ten soccer next fall, making his verbal commitment to Wisconsin.

“I committed to Wisconsin due to many things,” Hail told TopDrawerSoccer.com. “The coaching staff was a huge part, as they made me feel welcome on campus and made me feel like a part of the team while I was only a recruit. I couldn’t ask for a better location that Madison. I fell in love my first visit. As well as a very strong soccer program, the University is a very respected school.”

While Wisconsin hasn’t really made a big splash on the national scene in recent times, Heil thinks that head coach John Trask is inspiring and upward trend, and that the future is bright.

“I liked the direction the program was going,” Heil said. “Wisconsin has not been a powerhouse in years past but I believe we will in years to come. With additions like Alec Cochran and Drew Conner I knew Coach Trask meant business and was there to win a title. In addition, the program, like I said earlier, just made me feel comfortable.”

Of course, the school itself had the right kind of backdrop, which didn’t hurt either.

“The location of Madison, sitting between lake Monona and Mendota, is one of the most beautiful campuses I have been to,” he said. “In addition it is a very good academic school that can set up a great future for me.”