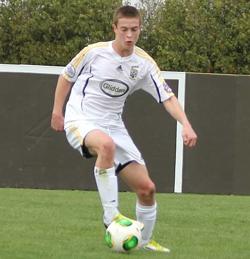 The Cincinnati United Premier U18 squad continues to be a goldmine for college coaches, and Manhattan is the latest to land the verbal commitment of one of the players on the squad.

“What initially drew me to Manhattan College was their excellent engineering program, which is what I plan to major in,” Bohn told TopDrawerSoccer.com. “Then after visiting the school and meeting with coach [Jorden] Scott, I knew that Manhattan was a place where I would be able to excel both athletically and academically.”

The Jaspers started 2013 slowly, but have picked it up recently and enter the week with an undefeated record in conference play. The addition of Bohn could prove to be a big help for the program, as the Ohio-native has been a key contributor to the success of CUP’s U18 squad over the past few seasons.

Bohn said that he also considered Loyola (MD), Johns Hopkins, and Radford prior to making his commitment.

Although that is a trio of top-notch institutions, it was Manhattan that stood out from the field and Bohn saw something in the program’s style that felt like he will be right at home on the field with the Jaspers.

“I believe that my style of play will fit in very well with Manhattan’s style,” Bohn said. “Manhattan has a very hard-working team, but they are also very quick and technical on the ball, which are what I believe to be my best attributes.”

With seven seniors on the roster this year (including four midfielders), there will be ample opportunity for Bohn in 2014 to make his mark immediately on the program.

Considering the pedigree of both the institution and the men’s soccer program, it’s never surprise to see players with intriguing backgrounds make the commitment to Chapel Hill.

Jesus Bolivar, a midfielder standout for Gulliver High School in Miami, is the latest to join the 2014 recruiting class.

“I decided to commit to North Carolina because it is one of the best schools in the nation soccer wise and academically as well,” he told TopDrawerSoccer.com.

A hard-working player who takes pride in being a quality teammate, the team’s recent success was an obvious draw, along with head coach Carlos Somoano and the rest of the coaching staff. Then of course, the opportunities in the classroom were numerous.

“One of the things I liked about the school itself was the diverse academic programs that it offers,” Bolivar explained. “Another thing I liked about it was the campus. It's one of the nicest campuses in the country. I also liked the environment and how it seems like a really big family.”

Bolivar is the latest addition to a recruiting class that includes Alan Winn (Solar Chelsea), Andy Lopez and Zach Wright (both with Sporting KC).

Midfielder Bay Kurtz (Chicago Fire) committed to Liberty for the class of 2014.

Defender Austin Fuller (Colorado Rush) committed to Denver for the class of 2014.

Defender Ismail Lapp-Kamara (Bethesda Olney) committed to George Washington for the class of 2014.

Forward Danny Kaiser (Bethesda Olney) committed to American for the class of 2014.

Forward Airrion Blackstock II (Georgia United) committed to Xavier for the class of 2014.

Midfielder Jad Arslan (Georgia United) committed to West Virginia for the class of 2014.

Midfielder Ryan Marcano (Georgia United) committed to Virginia Tech for the class of 2014.

Forward Elijah Agu (CASL) committed to Elon for the class of 2014.