A player who is comfortable with the ball at his feet, Tarek Fayed elected to stay close to home, opting to continue his playing career with a rising program. 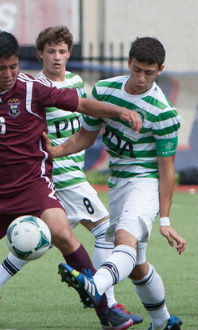 “I committed to Temple University because it is a great college that obtains such an enormous reputation,” he told TopDrawerSoccer.com. “It was the ideal school that allowed me to have the perfect balance between my academics as well as my soccer.  Being that Temple has such great Science and Engineering programs as well as a competitive soccer program; it was a clear and easy choice that this is where I wanted to spend my college career.”

Fayed also liked the team’s style of play, not to mention how he sees things trending upward at the Philadelphia school.

“The soccer program at Temple University is very strong and is only getting bigger and stronger every day,” he said. “I personally love the style of soccer the team plays, it is simple and fast. They play the same style as I have played my whole life. I like the fact that Temple plays in a highly competitive conference where anyone can win the title at any given day. I love the competition.”

The school’s backdrop in downtown Philly was also a plus.

“The school’s campus is beautiful,” Fayed said. “I just felt that it was for me. I enjoy the city life and the casualty of not being so far from home and my family. That was one of the largest factors as to why I committed to Temple.”

A versatile player who can pop up in a number of positions on the field, Niel Guzman was another recruit who liked the idea of playing close to home.

“One reason I committed to Rutgers is because it is very close to my home and I have always grown up a Scarlet Knight fan,” he told TopDrawerSoccer.com. “They have always had a strong soccer reputation. I also considered the fact that the team in general is very young with a lot of talent, and I believe this team could really be a contender for many titles in the near future. I hope I can contribute to their success.”

While growing up a fan, and his dad and cousins both alumni program, becoming a Scarlet Knight always seemed inevitable. However, along with a promising young team, Guzman found plenty to like about things on and off the field.

“When I visited Rutgers, I was extremely impressed with their athletic facilities,” he said. “I feel I really already have a chemistry built with the team because I have played with most of the other players in my recruiting class as well as some of the existing players. Also, I feel very comfortable coming in to the program because I have had coaching experience with the assistant coaches.”

At the tail end of another successful season, Marquette caught the eye of local recruit Colin Koerber.

The defender liked the program’s recent success – they clinched the Big East regular season title over the weekend – and the competition that particular conference has to offer, among other things.

“I loved my visit, the coaching staff, and the great soccer and academic tradition,” Koerber said. “I feel I fit their style of play and I will be right at home.”

Midfielder Ethan Sonis (FC Dallas) committed to UCF for the class of 2014.

Forward Luca Giovine (Chicago Fire) committed to Florida International for the class of 2014.

Midfielder Matthew Mooney (Western United) committed to Massachusetts for the class of 2014.

Midfielder Nick Jewell (Internationals SC – OH) committed to Lehigh for the class of 2014.