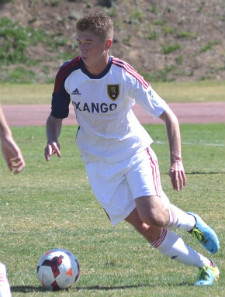 Now, he’ll look to score some big goals at the Division I level, recently committing to Creighton. It was a decision founded in the way the team plays.

“When I saw film of Creighton, it really reminded me of the system we play here at the Real Salt Lake Academy and that got me excited,” Waldrep TopDrawerSoccer.com. “Also, their program has been very successful in NCAA tournaments for many years and I would love to be a part of that. There's a lot of tough competition in the Big East, but I'm really looking forward to the challenge.”

The Bluejays have evolved into a perennial power over the last several years, with a reputation for deep NCAA tournament runs and sending players into MLS.

A visit to the campus this January and an interaction with head coach Elmar Bolowich left an impression on Waldrep.

“Morrison Stadium is about as professional environment as you can ask for, and all of the other sports facilities on campus are also top notch,” he said. “With coaches like coach Bolowich and coach [Johnny] Torres, I felt very comfortable that Creighton would be a great place to develop further as a player and chase my dream of playing professionally.”

New Zealand imports are nothing new to the Division I game, and Cameron Hogg is the latest in the line of Kiwis to make the long trip to the States about playing here.

Hogg, a strong leader who takes pride in his organizational ability at the back, is heading to upstate New York to compete at Buffalo.

The university also provided Hogg the blend of academics and soccer that he was looking for.

“The school was very accommodating with my entry into the school and provided the courses that I was looking for as well as a high standard of soccer,” he said.