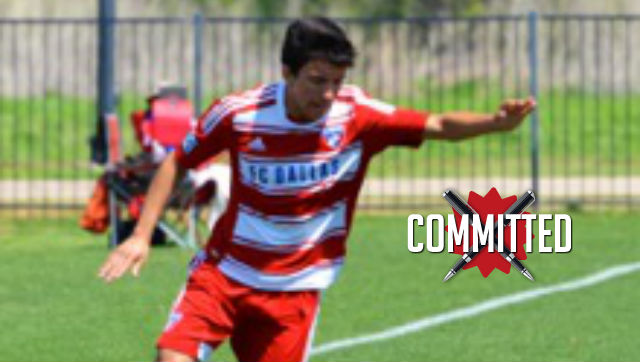 A veteran of the U17 World Cup with Canada, outside back Eric Davies decided that Saint Louis was the appropriate next step in his soccer career.

“Not only is St. Louis a top D1 soccer program they also have incredible academic programs. I feel like St. Louis will not only prepare me for the next level on the field, but will also provide me with the proper environment needed to succeed off the field as well."

An attack-minded player who likes to get up the field to join his team’s offensive push, a stop on campus during the summer sealed the deal for him.

“When I visited this summer I was able to tour the beautiful campus and all the athletic facilities,” Davies said. “From that moment I had a vivid picture of myself attending the university and fitting right in with life on campus.”

Davies is the fifth verbal commitment to Saint Louis for the class of 2015.

Alex Waldron pictures himself as a well-rounded goalkeeper, who not only excels at shot stopping, but all aspects of the game.

An in-state program drew his attention, and eventually he made his commitment to join UC Irvine next fall.

“I committed to UC Irvine because it has everything I want and need in a school,” Waldron told TopDrawerSoccer.com. “Its focused structure towards athletes was attractive. The hospitality and interest shown toward my personal goals and interests was greater than any option that I had.”

Waldron said that the soccer program was the most appealing part of the school.

“It's Division I level and standard of play is the perfect fit for success,” he said. “Coach [Chris] Volk, being the head coach and goalkeeper coach has the ability to push me to my full potential while at UC Irvine.”

The location was an added bonus, as Waldron looks forward to living near the beach.

“The school's campus and location is one of the best around the world,” he said. “Their facilities and buildings are gorgeous and accessible at the same time. And of course, the campus is just minutes away from the beach.”

Six players are committed to UC Irvine for the class of 2015.

A recent commitment to Maryland made that a reality, as the Florida native will head to College Park in 2015.

“What I liked about [Maryland] and chose it was the campus, coaching staff, and environment around the school,” Samuels told TopDrawerSoccer.com. “I've always wanted to go up north for school and it's close to family, which makes it even better.”

Planning on pursuing a business degree, Samuels also though the school will set him up for success on and off the field.

“I like the soccer program because they are a very good program that is devoted to winning but also player development and I feel like coach [Sasho] Cirvoski can help me take my game to the next level,” he said.

Samuels is the sixth verbal commitment to Maryland’s 2015 recruiting class.

Another Florida native, Bryan Missana has spent the past season in Minnesota, playing Development Academy soccer for Shattuck St. Mary’s.

The attacking midfielder/winger was the U16 side’s leading scorer with 10 tallies on the year, and will make the next stop for soccer in Texas, committing to SMU for next fall.

“I committed to SMU because it provided me with a great opportunity to grow at a school with a top soccer program in a competitive conference and a top 20 business program,” Missana told TopDrawerSoccer.com. “SMU stood out from the other schools that were recruiting me based on the excellent balance of soccer, academics and social environment. Being close to a big city like Dallas with a smaller university setting was very appealling to me.  I also like the fact that another Shattuck alumni (John Lujano) is on the roster and has had a good deal of success in the program.”

The Shattuck standout also hit it off with the SMU coaching staff, coming away impressed.

"Coach [Tim] McClements and coach [Kevin] Hudson did a great job of making me feel welcome and describing their vision of the future of SMU soccer, as well as my role in future success," he said. "I really look forward to the challenge of playing in the competitive American Athletic Conference and playing a highly competitive out of conference schedule, including two teams from my home state of Florida."

Missana is the third verbal commitment to SMU for the class of 2015.