Crossfire Premier’s U16 side is enjoying a strong campaign in the Northwest Division in the Development Academy. The Washington state club is 8-3-4 on the year and sits in third place in the division.

At the head of the charge is forward Satoshi Chaffin who has seven goals in 15 games this season. The 5-foot-11 striker recently gave his verbal commitment to Santa Clara.

“I decided to go with Santa Clara because I was looking for a small college where the teachers know who I am so I can interact with them whenever I need help on the academic side,” Chaffin told TopDrawerSoccer.com. “I feel like the West Coast Conference is getting better each year, and I wanted to be surrounded by players that bring the best out of me, which I believe Santa Clara offers.”

The distance from his home in Puyallup, Washington also played a factor as Santa Clara is close enough for his family to come down and see him play a couple of times a year.

“What really stood out for me was [Santa Clara’s] very strong soccer program and the number of players they’ve sent on to MLS over the past few years,” Chaffin added. “Erik Hurtado was the fifth overall pick in this year’s draft so that just shows the level of players that they produce.”

The Crossfire standout also cited the coaching staff at Santa Clara, adding that coaches Cameron Rast and Eric Yamamoto made him feel comfortable. 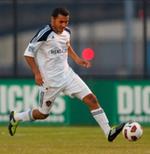 When it comes to bringing a player into a college program, it doesn’t hurt when the coach recruiting you already has experience doing just that.

Such is the case for LA Galaxy midfielder Vincent Reyes, who was previously recruited by Florida International head coach Kenny Arena as a 15-year-old, to come and play for him at the MLS Academy.

After tasting success under Arena, Reyes has now jumped at the chance to join him in Florida.

“I really enjoyed playing for Kenny for two years before he left for Miami, and being able to play for Kenny for 4 more years is something I could not pass up,” he told TopDrawerSoccer.com.

Moving to Miami certainly doesn’t hurt either, and Reyes said that the diverse student population at FIU reminded him of California. He also indicated that he got along very well with the rest of the coaches, not just Arena.

“When I went to visit FIU, I met the coaching staff and I felt very comfortable with them,” Reyes said. “I was able to see the team play and I could see Kenny's coaching style already having an impact on the team.  The guys on the team were great and made me feel at home, I knew right away that this was the team for me.”

Defender John Requejo, Jr. (Real So Cal) committed to UCLA for the class of 2014.

Forward Donovan Japp (NC Fusion) committed to Appalachian State for the class of 2013.

Goalkeeper Damion Lewis (Kendall SC) committed to Coastal Carolina for the class of 2013.

Forward Cody Sitton (Tampa Bay United) committed to Amherst for the class of 2013.

Defender Thomas Poll (Sockers FC) committed to Drake for the class of 2013.