A standout high school and club soccer player from Maryland, the promise of a strong program in North Carolina helped lure Jake Turney to make his commitment to UNC Wilmington. 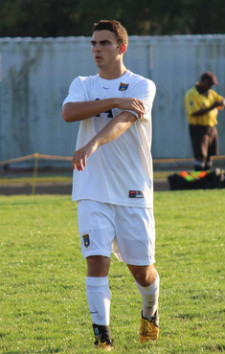 “The soccer program is just fantastic, everything about it is great,” Turney told TopDrawerSoccer.com. “The team chemistry is wonderful and that played a huge role in my decision. The team is also very talented and competitive so everyone is always getting better. Also the coaching staff at UNCW is phenomenal. All of the coaches are very friendly, and made me feel welcome on my visit. They all really understand the game and I really believe that I will improve tremendously as a player at UNCW.”

In the middle of his senior year at River Hill High School in Maryland, Turney has been rolling, with six goals and six assists through the current fall campaign. He also plays club soccer for SAC (Soccer Association of Columbia), and will take his lengthy soccer resume to North Carolina next fall.

While the soccer team had great appeal to the forward, there were plenty of other traits of the school that he liked.

“I also want to go there because I love the campus and I think it is absolutely beautiful,” Turney said. The college is great academically and it just feels like a great fit for me.”

A creative winger who likes to set up scoring chances for his teammates, UC Irvine simply made Luis Felipe Silva an offer her couldn’t turn down.

“I had opportunities to play for other schools but I could not pass up playing for Coach Kuntz, and attending UCI,” he told TopDrawerSoccer.com. “I really like the style of play that UCI has and they have many talented players.”

“The Big West Conference is one of the best in the country and UCI is a great school academically,” he said. “The campus is close to home so I am excited that my family will be able to come see me play.”

Forward Ryan Taylor (Oakwood SC) committed to Central Connecticut for the class of 2014.

Midfielder Christopher Nash (Everton FC Westchester) committed to Monmouth for the class of 2014.

Forward Steven Bayse (River City Rovers) committed to Xavier for the class of 2014.

Midfielder Austin Kuhn (PA Classics) committed to Penn for the class of 2014.

Defender Sebastian Joly (Virginia Rush) committed to Old Dominion for the class of 2014.

Midfielder Drew Mahoney (PA Classics) committed to James Madison for the class of 2014.