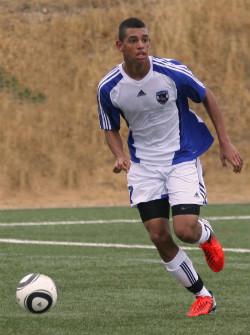 A center back with impressive size – Thomas stands at an imposing 6-foot-4 – the decision to commit to Brown was fueled by finding a school that offered him the right blend of what he was looking for at the DI level.

“I chose Brown because of their high academic standards and winning soccer program,” Thomas told TopDrawerSoccer.com. “Brown has an outstanding engineering program. I was looking for a school that would allow me to pursue a degree in engineering and play Division I soccer. My ultimate goal is to become an architect and Brown's partnership with Rhode Island School of Design made Brown even more appealing.”

Head coach Patrick Laughlin has done an impressive job with the Brown program since taking over the top spot in 2010, and the team’s on field success was another lure for Thomas.

“I am excited to play for a program that has had 25 NCAA appearances and a Sweet 16 appearance last year,” he said. “I look forward to playing under coach Laughlin and his staff in a competitive environment, and who also strive to develop players to their full potential. The players are dedicated athletes and students, are supportive of each other and get along very well.”

An energetic and aggressive center back, Syracuse’s recent rise to a formidable college soccer force helped Spencer Kopko make the commitment to his local program.

That the team is joining the ACC in the fall certainly didn’t hurt either.

“The move for Syracuse to the ACC was a very appealing reason for me to accept a position on the soccer team because it gives me an opportunity to compete against very high-level teams,” he told TopDrawerSoccer.com.

Impressive facilities and support for student athletes were among the other aspects of the school that caught Kopko’s attention, not to mention the influence of a coaching staff that is reshaping the program.

“The soccer program is improving rapidly thanks to head coach Ian McIntyre's and assistant coach Jukka Masalin's winning attitude and spirit that they instill in every one of their players,” he said. “I liked how all of the facilities are geared towards creating a winning team and I look forward to embracing that challenge.”

Kopko also liked the academic opportunities that he found at the school.

“Two things that were appealing were the educational opportunities that are offered and also the fact that the professors work very closely with the athletes to ensure their success,” he said. “An added benefit of committing to Syracuse is that it is only an hour away from home so that my friends and family will be able to attend the home games.”

Defender Kyle Losi (Oakwood SC) committed to Fordham for the class of 2014.

Defender Jared Kent (Charlotte Soccer Academy) committed to Charlotte for the class of 2014.

Goalkeeper Sean Melvin (Whitecaps FC) committed to UNC Wilmington for the class of 2013.