Will Campbell is a versatile defender who's been involved in the Philadelphia Union Academy system over the past couple of years.

The ability to play left back and center back certainly caught the eye of the ACC power, and Campbell thought that the school offered him the right mix to fit his ambitions. 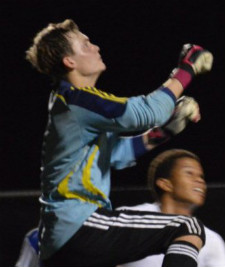 “I decided to pick North Carolina because of the combination of a strong soccer program and strong academics,” he told TopDrawerSoccer.com. “The school has all of the things any soccer player needs or would want in order for them to be successful on or off the field.”

Head coach Carlos Somoano and the rest of the team’s coaching staff was another huge plus.

“They bring in quality players every year, and do a great job of developing them when they arrive,” Campbell said. “I wanted to be in a top soccer program where I could grow as a player.”

Location was also another important aspect to Campbell’s decision.

“I wanted to stay on the east coast so I wasn't too far away from my family, and I wanted to be at a place where I could get what I need academically,” he said. “UNC has everything that I was looking for.”

Knowing that he needed to be in an environment that pushed him every day, Matthew Reynolds made a bold decision last year. He opted to move to Minnesota and play for Shattuck St. Mary’s, the boarding school that doubles as a Development Academy side.

A goalkeeper who thrives under pressure, Wofford stood out to him right from the outset of his college search.

“I had a list of at least fifteen schools, but Wofford stood out for several reason,” Reynolds told TopDrawerSoccer.com. “The coaches are not only excellent in their sport, but they are also genuinely good people, very organized, and have high expectations. Coach [Ralph] Polson and coach [Joel] Tyson were also goalkeepers when they played in college so I think that I can learn a lot from them and we might even share a common mindset as goalkeepers.”

The coaching staff has created an environment that also appealed to Reynolds, as he saw first-hand on a trip back to the southeast.

“The program at Wofford also has a strong commitment to building a team atmosphere among players. I came home from Minnesota one weekend to see Wofford play Furman for the SoCon regular season title. During this trip, the team chemistry was very apparent and helped them to win. Lastly, all of the players for Wofford that I have met are committed to excellence both on and off of the field. This was evident as I observed them studying for exams and being very committed to their academics. Wofford is a program that's on the rise in the Southern Conference and I cannot wait to help contribute to our success.”

A center back for the Carolina Rapids – an affiliate of the Colorado MLS club in North Carolina – Brayden Smith feels as though his demanding DA schedule has prepared him well to make the jump to UNC Wilmington in 2014.

He’s ready for the challenge and eager for it.

“I knew UNCW was the place for me when I got to spend time around the coaches and team,” Smith said. “The players are great men on and off the field and they treat each other like family, and I know the coaches will do whatever it takes to help me be successful on the field, in the classroom and out in the community.”

Forward Ryan Stinebaugh (Texas Rush) committed to Carnegie Mellon for the class of 2014.

Midfielder Vukashim Latinovich (Milwaukee Kickers SC) committed to Wisconsin-Milwaukee for the class of 2015.

Midfielder Adolfo Ovalle (Real Salt Lake-AZ) committed to Maryland for the class of 2015.