Last fall, Washington claimed the Pac-12 title and were a game away from playing in the College Cup. 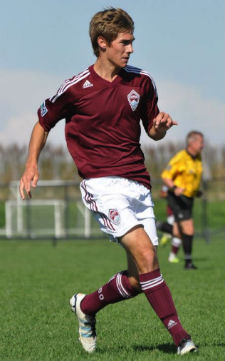 In order to keep the program at that level, bringing in quality players like Quentin Pearson is a must. A recent invite to a U.S. U18 MNT camp, the Colorado Rapids Academy center back pledged for a simple reason

“I decided to commit to Washington because it offers all the tools for me to excel as a soccer player and as a student,” he told TopDrawerSoccer.com.

The team’s successful 2013 campaign certainly factored in, along with a coaching staff that made Pearson feel comfortable.

“From the soccer side, Jamie Clark is just an awesome guy, and upon meeting him and talking with the coaching staff at UW I felt like I would be able to grow as a player, and compete for championships in one of the best conferences in the nation, the Pac-12,” he said.

The charm of the University’s location also weighed in on Pearson.

“When I visited the school I loved the campus and the city of Seattle,” he said. “As a kid from Colorado, I wanted to go somewhere what had a similar culture, and at Washington I felt super comfortable, and I think it is a place where I can really thrive academically as well as on the soccer field.”

Harboring the ambition to play college soccer since he was seven years old, Ryan Cretens will realize that dream without even leaving his home state.

“It is an honor and a privilege to attend and play for such a great, well-rounded university like UNCW,” Cretens told TopDrawerSoccer.com. “Their soccer program has a lot of great things to offer. With the knowledge and expertise of Coach Heaney, Coach Haines, and the rest of the coaching staff, I will have the ability to strengthen my skills and compete with the best competition in the collegiate D1 soccer program.”

Cretens also liked the team’s tight-knit atmosphere, as it represented something he was looking to be a part of at the college level.

“The team is very talented, balanced, and composed of a great ‘family-oriented’ culture,” he said. “They are all hardworking and are a committed group of guys.”

Midfielder Joseph Kerridge (Colorado Rush) committed to Lipscomb for the class of 2014.

Midfielder Peyton Harris (Boise Nationals) committed to Seattle Pacific for the class of 2014.

Goalkeeper David Hay committed to Stony Brook for the class of 2014.

Defender Ben White (Portland Timbers Academy) committed to Gonzaga for the class of 2014.

Midfielder Josiah Baker (Georgia United) committed to Furman(m) for the class of 2015.