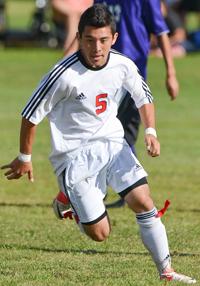 There are certain players that defenders just dread seeing - the speedy, elusive dribbler is near the top of that list.

And there may not be a better one heading to the college game in 2014 than Guy 'KJ' Ahlo. The tremendous talent from Hawaii has made a name for himself with his ability to make defenders fall on their backside and hit the ground.

Ahlo’s ability on the ball to cut at the sharpest of angles have made his highlight videoes some of the most entertaining among the plethora of soccer clips on YouTube. His latest from San Francisco's I.D. camp shows just how clever he can be when a defender is on his heels. The coaches at the camp appeared to be pretty happy as well, and the relationship has only taken off from there.

The high school junior made his verbal commitment shortly after the camp.

“When I first stepped into Negoesco Stadium, I could feel the ‘mana’ or spirit of the teams and players who had come before me,” Ahlo told TopDrawerSoccer.com. “With USF, it was more than just being a student athlete, it was about upholding a tradition--no, a legacy--of soccer excellence dating back to the early '60s. Legends have stood on the field where I will be playing and I wanted to follow in their footsteps. I feel that I am up to the task.”

San Francisco was one of a number of schools from the West Coast that had expressed interest in landing the word of one of the best players from the island state. The Dons won out thanks to the connection Ahlo felt to the coaching staff.

“I chose USF because of the positive and mutual connection I immediately felt with the coaching staff,” he said. “From my first phone call to [assistant] coach [Dan] Chamberlain back in February to this past week when I revisited the USF campus and met with many of the staff, USF did everything in their power to accommodate me.”

Ahlo’s popularity comes from a couple of different avenues as he first popped up on the scene many years ago with YouTube clips of his juggling exploits as a 10-year-old.

Recently, he gained his mark on the national scene when Nike’s The Chance coaching staff selected him as one of the few from the United States to join the trip to Barcelona and compete for a professional contract.

“Nike's The Chance competition was easily the highlight of my soccer career thus far,” Ahlo said. “Although I haven't received any direct attention from national scouts as a result of The Chance, it was definitely a once-in-a-lifetime experience that I will never forget. Before it all began, I would've never dreamed I'd be going to Barcelona to train amongst the top 100 unsigned soccer players in the world, experiencing a culture so different from anything I'd ever seen - not to mention meeting Iniesta, Pique, Sanchez, Pedro and the FC Barcelona family!"

Players continue to take note of what is going on down at VCU, as many recruits have noticed the style of play head coach Dave Giffard’s programs implements.

Defender Curtis Kirby liked what he saw from the team.

“I decided to commit to VCU because the style of play is based on technical players with the mindset to out-possess the other team,” he told TopDrawerSoccer.com. “It really is the way to play soccer. Also, the team is very close and brings a family atmosphere to new and old players.”

It wasn’t only the soccer program that caught Kirby’s eye as well.

“I really liked the large community atmosphere as well as the academic opportunities VCU has to offer,” he said. “Also the amount of diversity really makes a unique and appealing school to me.”

A captain and leader on his club team, it only seems normal for a player like Christian Nolasco to make his verbal commitment to Army.

Not surprisingly, that influenced his decision-making process.

“On an academic stand point it's one of the greatest leadership institutions not only in the country but in the world and the respect and honor is tremendous,” he told TopDrawerSoccer.com. “The campus is beautiful and relatively close to home as well.”

There were plenty of positives on the field as well, as Nolasco is hopeful he will thrive in a new environment.

“On the soccer standpoint, I loved the family atmosphere from the coaches to the players,” he said. “The coaches are all great coaches and even better people and that's something I really valued. They have a lot of experience behind them and on a goalkeeping side of things, coach [Russell] Payne and coach [Steve] McAnulty were both goalkeepers and that will help further develop my game as well."

Goalkeeper Eric Patterson (Indiana Fire Academy) committed to Belmont for the class of 2013.

Forward Daniel Davis (CASL) committed to Davidson for the class of 2014.

Midfielder Alec Nagucki (Internationals SC) committed to Cleveland State for the class of 2014.

Defender Jake Skoll (San Diego Surf) committed to Davidson for the class of 2014.

Defender Garret Jackson (Crossfire Premier) committed to Washington for the class of 2014.