As NC State head coach Kelly Findley continues to land verbal commitments of quality players for the class of 2014, it begins to draw in other top players.

Surely that’s one of many reasons the list of committed recruits from the IMG Academy 150 is now at four, with the latest addition Heislitz, a goalkeeper who spent time with the U.S. U17 Residency Program in the spring of 2012. 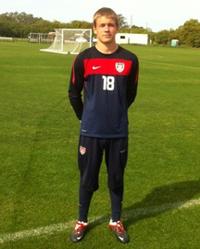 Plenty of things stood out to the youngster during his college search.

“There are many reasons why I chose NC State,” he told TopDrawerSoccer.com. “One of which is it being in the ACC. I believe that the ACC is the most competitive conference in college soccer so I want to be playing at the highest level possible.”

There’s little doubt that Findley’s team made quite the impression on Heislitz.

“The soccer program is phenomenal,” he said. “The athletic facilities are incredible and so is the coaching staff. It was the perfect fit for me.”

Off the field, the university’s setting also played a hand in the netminder’s quest for a collegiate home.

“The school is amazing,” he said. “The campus has new and old buildings and is in a great part in the town of Raleigh. It has a lot of students and is a big school, which was what I was looking for as a student.”

A technical attacking midfielder from Weston FC, Jason Garcia decided that staying close to home might be the best decision when it came to picking a school – but that was just part of his college evaluation process.

“I had a very great connection with the coaching staff,” he told TopDrawerSoccer.com. “I felt very comfortable staying close to home and it would also give my family a chance to see me play since I only live an hour away.”

The opportunity to test him at a higher level was also appealing to him, as he thought highly of FAU’s opponents in the Mid-American Conference, which includes Akron.

“One thing that I really liked about FAU soccer program was that they are a very competitive team and also compete in a challenging conference, which is critical to my development as a player,” he said.

Garcia chose Florida Atlantic over other options including UCF and Army.

Defender Brandon Lopez (Brentwood SC) committed to Pikeville for the class of 2013.