At the end of the 2011-12 Development Academy season, Evan De Ycaza was scoring goals for fun. With 23 tallies in 28 games, it wasn’t going to be a surprise to see him land at a prominent collegiate program. 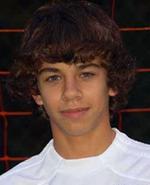 This past week, the sharpshooter from North Carolina club CASL made his decision: Furman was to be his college soccer home.

“I chose to attend Furman not only because it is an excellent academic institution and one of the most beautiful campuses in the nation, but also because of the rich history of the soccer program,” De Ycaza wrote TopDrawerSoccer.com in an email.

“Furman, over the years, has been the home of many great soccer players and I feel a large part of that is because of Coach Doug Allison.  He made me feel at home when I visited Furman, which was something that went a long way in helping me make my decision.”

As he went through the convoluted recruiting process, De Ycza kept patient, did a lot of research, and saw several schools up close, not in a rush to make his decision – despite his goal-scoring attracting obvious attention to him.

Along with being an obvious admirer of the soccer program, the striker thinks that he’s found a destination that will set him up well for the future.

“I believe Furman will be a place where I can succeed both in the classroom and on the soccer pitch.” He said. “I believe it is natural as a soccer player to set goals for himself and strive to get better. I feel that at Furman I will get better, giving me a shot at realizing my goals.”

It’s been far from a usual route to Division 1 college soccer for Gary O’Neill, a dual citizen of Ireland and the United States.

The midfielder was born in the USA, but moved back to Ireland when he was four years old, before returning to the States to play at Ashley High School and for the Cape Fear Breakers in 2010 down in North Carolina.

After a strong couple of years playing back in elite soccer circles on these shores, he caught the attention of several programs and recently made the commitment to UNC Wilmington, where he’ll enroll next fall.

“I immediately felt very welcomed and cared for and I knew I wanted UNCW to be my new home,” O’Neill wrote TopDrawerSoccer.com. “I have always wanted to be at a university where I can strive to be my best on and off the field.”

The opportunity to play and also attend school also had massive appeal to O’Neill, who has trained with Premier League side West Ham back in the summer of 2011.

“My education is also something I take very seriously and the Center for Entrepreneurship at UNCW is something that I am really interested in exploring,” he said. “I would like to play soccer as long as I can, earn a degree in business and apply that in the rapidly growing industry of Soccer in the US.  I am really grateful for this opportunity and I am very honored to get the chance to play for such a well-respected University.”

There are also a lot of similarities between O’Neill and UNCW head coach Aidan Heaney, who is also an Irish-American.

“Aidan definitely understands what it means for me to come from Ireland and earn a spot at a Division 1 soccer program,” O’Neill said. “There are literally thousands of players in Ireland and across Europe who would love to have the chance.”